Total views: 0 times this week
Craig Smith - Ancient Of Days
He Is Risen The Child Will Be Sculptor Of My Heart Rest That Remains Refuge Pure Heart Lord Of All The Earth Jehovah Glory To The Holy One Father Me
Ancient Of Days video Craig Smith twitter


Craig Smith
Chosen to serve as the sacrifice lamb
The binder of all the earths wounds
Called the Deliverer, Chief Cornerstone
Slain and then buried, but He rose from the tomb
Chorus
He is the Ancient of days
Giver of freedom with the price that He paid
He is the Ancient of days
Exposing the enemy's great masquerade
Giver of life, His is the Ancient of days
Courageous Redeemer, who's life giving blood
Is the ransom for wayward man's soul
Covenant Messenger, Heir of all things
The Shepherd and Guardian, Guardian of souls
Chorus
Warrior of holiness, Messiah and King
Ruler of Israel, Salvation's great Captain
Hope for all man
One day every tongue will say the Lord is He
Chorus
"In the beginning was the Word, and the Word was with God, and the Word
was God. He was in the beginning with God. All things came into being by
Him, and apart from Him nothing came into being that has come into being.
In Him was life and the life was the light of men. The light shines in the
darkness and the darkness did not overpower it." John 1:1-5
"...conduct yourselves in fear during the time of your stay upon the
earth knowing that you were not ransomed with perishable things like
silver or gold from your futile way of life inherited from your
forefathers, but with the precious blood, as of a lamb unblemished and
spotless, the blood of Christ." I Peter 1:17-19
It's an awesome thought to realize that Jesus, the man born of a virgin
and laid in a hay stable, created the universe with God the Father. They
spoke a word and the stars and planets were flung into existence. They
spoke another word and living creatures were formed, and yet another
word and man's flesh was formed. They used their very breath and
breathed life into the nostrils of this man they had created. They gave
this man the ability to decide, a choice to obey his Creator or to
disobey Him. He disobeyed. God, the Ancient of Days, loved this man so
much, He gave His only Son, His co-creator, to be born in a manger, then
be put to death by this man. God's Son, His Lamb, was the ransom for this
man.--Bill Stuckey
Explain lyrics
Correct lyrics 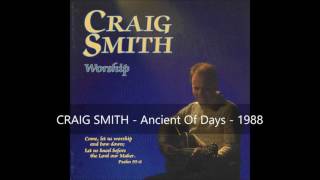 check amazon for Ancient Of Days mp3 download
browse other artists under C:C2C3C4C5C6C7C8