[Consequence:]
You see once upon a time not long ago
There was a princess in search of some longer dough
Who had ran into this squire who had all the flows
So the king requested his presence at all the shows
Son had all the hoes, showin they tits a lot
Cause he was less like Lance, more like Mix-A-Lot
In the mix a lot, so they hated like Hamlet
Cause he smoke more trees than the Forest Enchanted
And then got chanted, through the coliseums
And he bought all his kicks from the Coliseum
They would try to see him, but they wasn't quite able
Now he ballin out with the knights at the roundtable
And he get Fresher than that Prince from Bel Air
In that G5 chariot so give me a hell yeah~!
So give me a hell yeah~! HELL YEAH! I said [Chorus]

[Consequence:]
I make a damsel in distress dismantle her dress
So once you take me past the guards I can handle the
rest
Got a plan for the stress, in these evil times
So I keep on body armor like it's medieval times
And finally he's arrived in the Benz from Berlin
And they expected him to start trickin like Merlin
Well girlfriend, "I got the Magic Stick"
But I ain't tryin to get what got Magic sick
So I keep a box of shields in my bag of tricks
Cause it's like a battlefield when you baggin chicks
And when I bare my knicks, I'm tryin to rob the hood
And rob it good, the closest thing to Robin Hood
So the V and not the B's, not only the question
But is the only time that you hear me pop the question
Cause I keep 'em second guessin - for trill 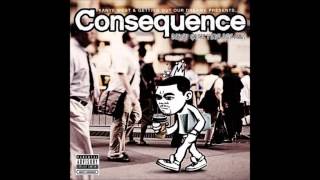