The Ballad Of Eddie Klepp Lyrics

The Ballad Of Eddie Klepp Lyrics

He walked into the clubhouse and the card players quit playing
Everybody stopped in the middle of whatever they were saying
It was just like when the sheriff walks into the saloon
He said, “My name is Eddie,” as he looked around the room

“This man's here to play baseball,” the manager said to the team
“We're all gonna have to live with this...aw, that's not what I mean...
You know what I mean” - and they all did...it went without saying
The card players looked at their hands and they went on with their playing

They ran him off the field before a game in Birmingham one night Made him sit up in the grandstand in the section marked “For Whites”
In his Cleveland Buckeyes uniform, it was a new twist on the law
The marshals kept their eyes on him and the hecklers ate him raw

Eddie Klep, he should've run the bases in reverse
A White man in the Negro Leagues, that had to be a first
He could not ride the same busses, or stay in the same motels
He could not eat in the same restaurants, you couldn't have mixed clientele

So while Jackie played for Brooklyn and wore the Dodger Blue
Eddie crossed the color line, the one without a queue
A White man in the Negro Leagues, might as well have been a Jew
Now you mention the name of Eddie Klep and most everyone says, “Who?”
Explain lyrics
Correct lyrics 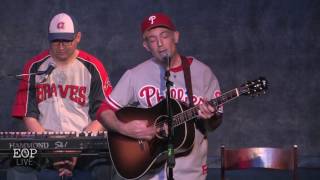