Ten miles stretch on an Indiana road T'was a sky blue Jaguar and a Thunderbird Ford Jaguar setting on ninety nine Tryin' to beat the Bird to the county line Just a half-a-mile from Newtonville There had a speed sign sitting at the top of the hill It said : "35 miles, and stay in line" But the Jaguar and Thunderbird never read the sign

Ludenville was a real small town Had a hundred and two And nine acres of ground Some stool pigeon put the sheriff wise Told him "Park down in Newtonville And catch 'em guys" Sheriff laid down, half hid in the weeds Parked for eight days, didn't nobody speed All of a sudden, dust rose on the road Said "Here come the Jaguar and Thunderbird Ford"

Sheriff doubled clutched second, put it in third Took right after the Jaguar and Thunderbird He knew he'd get a bonus and a big fat fine If he caught 'em 'fore they crossed that county line Sheriff never drove his car a hundred and flat But if he aimed to get 'em He'd have to do more than that Crest of the hill, he's about a mile behind There wasn't but two mor miles to the county line
[Chorus]

Old Sheiff was countin' on the downward grade With the tall wind pushin', he had it made Thunderbird saw the Jaguar gainin' speed And waved "Goodbye, Jaguar" and pulled in the lead Jaguar said "You ain't won the race yet" And pulled back around the Bird like a sabre jet Sheriff's front bumper was a yard behind When the T-Bird, Jaguar crossed the line 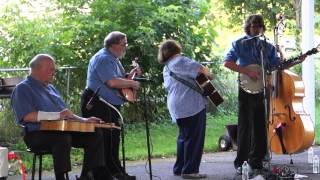 check amazon for County-line mp3 download
these lyrics are submitted by kaan
browse other artists under C:C2C3C4C5C6C7C8C9