Perpetual multiplier, procreating bastard
Ever had your gonads smashed by a ball peen hammer?
Ever been forced into a vasectomy by and ax wielding homovore?
Do you know the word pain? You will when the mallot falls

Cold vengeance on a rapist, immediate testicular shape-shift
Your manhood disintegrates and the stream starts to flood
A shimmering mix of spermatozoa and blood

Another human off the face of the earth
A new vagina to replace, its absence of girth It rubs the feces on its skin or else it gets the hammer again?
Torture, through blunt castration, slaughter, repeated testicular emaciation

For your gross misconduct the tables are rightfully turned
The urethra now a bile duct, the frayed ends of karma are burned
A gaping gash of reproduction, seminal waste of testosterone
That ceases to function

Asexual freak, no longer of the male persuasion
Your miserable heap of disfigurementation
Brings thousands of victims vengeance and elation
Sulfur and buckshot, decimating your crotch
Explain lyrics
Correct lyrics 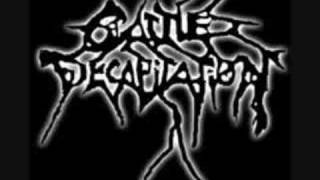