I should have known better and she shouldn't have been so surprised
The signs were there and yet I found myself none the wiser
She was on top of it all, while I just sat there naive
We'd seen things that you just wouldn't believe
Bodies scattered all around, and nations destroyed
Cities burning, armies deployed
We will hide from the war
Stop at nothing at all
I swear this to be true
If they come here, I will fight
Give you all my supplies
I will happily die for you
No one paid attention to the warnings broadcast on the television
Most just took it as a bluff, until they evacuated the prisons
Mothers still in mourning from the casualties only a week prior
Supermarket shelves remain empty, looted from the ceasefire
Children sent to the army and families torn apart
If only they knew that the war had yet to start

The panic grew louder, we watched from underground
Gunshots and screaming, while we were safe and sound
The internet disconnected, and no mobile phone reception
We just sat there waiting in our own personal detention
But then came a visitor to the tiny rooftop window
His face covered in blood and the whitest of snow

"Do we trust him? What if he's with the enemy?"
"We have to be vigilant, and ignore all adversaries"
"What if the coast is clear? We cannot survive much longer"
As the sun begins to melt the snow, and possibilities were pondered
His skull exploding across the surface, he was trying to warn us
As the shadows covered the viewing screen, seemingly amorphous 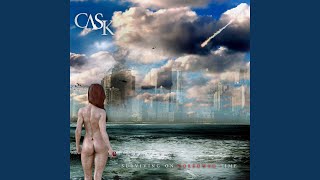 check amazon for Cataclysm In Winter mp3 download
these lyrics are submitted by BURKUL4
browse other artists under C:C2C3C4C5C6C7C8
Record Label(s): 2019 AudioDefine Records
Official lyrics by