[Verse 1]
I'm an old-school young bandit in the Hamlets
Locally known as an ASBO
And I'm known for the stains in the mains
So nobody hollas me when they have cro
Nowadays everybody's in the bando
Bring it to light, I bet he never had a tan though
You could be the king to them twenty little boys
Still can't say where I can't and can go
And I'm known for the noise, all of my boys
Roll round with toys, Hasbro
And as soon as a man is my pagan
You wanna roll round with him, you're sad, bro
I wrote this one for all the fans
When I perform this, they're gonna go mad
You bought her everything in the kitchen sink
But are you really gonna tap though? No
My real fans in pickles
Like "fam, why you spitting so simple?"
Usually when they spit like this
You give 'em a red card and you blow the whistle
Like where were you when we kicked ball?
In the pitch behind Percy Ingle
Your my brudda but you're nothing like Dimples
Man are hating becuh they've got wrinkles
And that's more than level and status
Newham for the barbers, level and fade us
Could never let another man downgrade us
Look at the minor that's running down majors
And that's more to life than followers and blue ticks
And throwing signs that Jay-Z uses
I ain't Drake, this ain't Toronto
I kill a man pronto, 3 is the new 6

[Break]
Stupid
Yeah you got it right it's the album
Shouts out to The Firm, R.I.P Sawn-Off
R.I.P Fizz Man, R.I.P Raver
R.I.P Salum, free N-L
Free Tanch, free Grim
Free all the mandem
In and out of the jail cells all the time
It's time to put Tower Hamlets on the map
Hotline Distributions, yo

[Verse 2]
If you're the king of my hood, I ain't from it
How can you be a king and you ain't on it?
I ain't iconic, I'm Akonic
Book a flight, go and hide in a rainforest
I ain't Ken Livingstone and I ain't Boris
Can't guarantee tomorrow cause it ain't promised
Making money's a crime, we do time for it
But time is money, you want something, you pay for it
They call me masonic, cause we never had the same heart
Or the same path or the same college
What's your take on it? Me and Zino and Joe on the coast
With our T-shirts on, still got your bae watching
You was out trying new things
I was true to the roots, day-dotting
Lunchman, You couldn't last a day's porridge
Get money on the move, never made office
And nah, not one man in the hood could say I ain't robbing
I could never sniff yay when I'm yay shotting
You ain't getting money, you is getting off your face on it
Way up, gotta be way honest
Don't play up, cause I might play on it
And the plates on my table are tectonic
So you tek what you tek from it
Port of Spain not Portmore
Sick of hearing 'em rapping about four-doors
Sick of hearing 'em rapping about support more
Gotta kick it in, what'd you think the door's for?
I was in the field taking shots
While all these MCs stared at the scoreboard
And for the record, I never brought war
That ain't nuttin' to be up in the store for
Know why? When it comes to war, man, I'm way too clever
It's on me, I ain't gotta look for the leathers
We bring the hood together
Better than the whole new-age grime scene put together
You ain't been in that place, me, I've been in that place
Ain't about that life, I'm living that way
From time I kick a man's face
Put me to the test, on my mum's life, I'm on handicaps
Killing MCs, I'm the man for that
Don't think you're untouchable
Cause any grime MC can be wrapped like a candy batch
About "Shut Up", say names
Oh, you can't? KK
So tell me, what's a G-A-T or a BET
Or a MOBO to an AK? 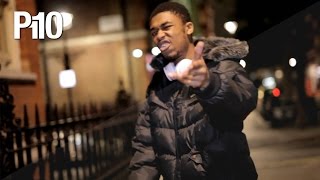 check amazon for 3 Is The New 6 mp3 download
these lyrics are submitted by itunes3
browse other artists under C:C2C3C4C5C6C7C8
Songwriter(s): Cadell
Record Label(s): 2015 Hotline Distributions
Official lyrics by