Bustin at our foes, for the sake of being riders
Till the casket close, thug shit be inside us
We try to survive it, cause all we got is the projects
On the camouflage sets, in the bricks, niggas die wet
Till the death for street glory, it's infinite beef
Though it's most of the reasons lotta niggas six deep
With heat, when we ride, we 'posed to roll that way
To keep a soul that way, with 44's that spray
The key to the city, it come in bricks or them birds
Thug niggas, drug dealers making flipping that 3rd
Born to my work, deserve what's supposed to be mine
If it's what the f*ck we need
Then D, we 'posed to be ride
Try to separate us, but it's survival of a thug
While you try to play us, now you gotta watch my slugs
Ride wit us, die wit us, follow us to the war
We got five on the weed and we blowin inside of the car

Ya'll niggas better I'mma die for this shit that I need
I've been committed too long for me not to succeed
I been in greed my whole life
And caught up in the weed
Hustling with thugs and everyday, go to sleep
Keeping the guns cocked
Surrounding the block, opening up shop
With a bundle of rocks in my socks
Niggas wann beef
If it come to that dogg, I'm down with it Stank a lick for the fetti
Get the cash and clown with it
Hennessy and weed when I'm comin'
Throw your guns up, let me see
If you bitch ass niggas gon make some noise bruh
Follow me now cause I'm coming up
And ain't that cold I got too many bitches running up
And niggas wanted to blast me, police harass me
If I slip in the street
I really think them niggas'll snatch me
Like I'm faking the game
But taking the pain letting them niggas know
How I'm shaking the game with nothing to explain

We gon die thuggin, we ride or die, stay muggin
And bustin, and flooding many bullets in your cousin
Survive or not, any block I hit is hot
Ask them warlocks shit, them hard-knocks give me props
Like them Melphomine boys
I got them toys that'll split ya
With enough ammo for every nigga that's with ya
I hit ya sun up or sundown it don't matter
As long as my muthaf*ckin' pockets get fatter
Bitch ass niggas on the edge they bout to fall
You wanna brawl, I make a muthaf*cking call
And kill ya'll shit, that's what I said and I meant it
That was your last dollar and you spent it, ya heard me
You 45 cent ass nigga, I make mills
Your bets to chill before you get your shit spilled
Lil' daddy I hope you make the right decision
I know some that'll have your ass missing 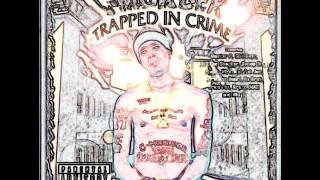