[ Bushwick Bill ]
Yes
We're here to talk about those who
Are considered to be an elected official
Who said it was official that when they was elected
That everything that they dealt with had me in mind
As a human being, as a man
But not as a slave or three fifths human
I have the right to bear arms
What makes you think I respect you?

[ VERSE 1: 3D ]
Hello Mr. President, residents of the White House, excuse me
I'd like to know, have you ever enjoyed an old-time gangster movie?
With the white man ringin shots on blocks
With their clean shave and pin strip-suits
Bootleggin-whiskey-rapin-black-women-and-havin-a-fat-stack-of-loot
Undercover David Duke, isn't it true
The gangster movement started long before my time
Long before the hair rag, gangster sag
Finger signs and love for nines?
Damn, in your minds and in your hearts
Is the hate really that deep, what's truly goin on?
Knockin me for the words I write
For writin movie scripts by whites like Mr. Al Capone

[ Bushwick Bill ]
Yeah
America
A land that made Christopher Columbus
A historian for bringing madmen, white slaves, and rapists
Kennedy, his dad was a bootlegger for Al Capone
Became President
Isn't it evident
That those who sit in the residence
Are not president?

[ VERSE 2: 3D ]
Now why you wanna try to knock me
Cause I'm black, got a gat
Twist my hat and all, listen to Mr. Scarface
Think about the way the government wants to hold us back
As a matter of fact
I believe the whole system is a huge crime scene
And everyday they're doin the dirty work
And layin it on us niggas, if you know what I mean
So don't corrupt your own minds foolin yourself
Tryin to lay it on the black man
I'm a young gee tryin to leave poverty
With a gat in my black hand
So white heathen, taken straight out of
The crate of a mouth of a babe
Yeah, a honkey can't stop what a honkey started
And the ghetto's what you honkeys made

[ Bushwick Bill ]
That's right, sittin up there in the White House
With your homosexual mentalities and female persuasions
Yeah, I'm talkin to all the J. Edgar Hoovers
That are still left in there
All the big brothers that are watching
I hope you're listenin Cause the bad shit you put on criminals has made the citizens take control

[ VERSE 3: 3D ]
Now Sergeant hit ya, get with ya
Let's get back to the issue, continue dissin
My way of livin, so a little nigga like me
Gots to go and dish ya this mission
Hopin that the message that I'm sendin
Gets through to you and your people
Devil, look at your own dirty past
Before you come to me with your blue-eyed evil
If I kill 30 innocent, would you write
A movie about me and spare
My life, or would you lock me up with triple life
And strap me down in the electric chair?
See, it's not about the sign I throw up
Or where I roam, or what a nigga wear
See cracker, it's all about respect for your hood
Your clique, and all of those whose pain with you share

[ Bushwick Bill ]
That's right, pain
The pain that I feel
Is the pain from shame
The shame that you've caused me
For over 400 years of protection
The pain that I have within me
The rage that is flaming
Makes me wanna say the things that I say
Do the things that I do
And let you know
That when you look at me
Or look down at me
Or look across from your side of the world to my side
That what you have failed to realize
Is that you've put me in projects
I realize it was an experiment
So when you put me in jail
I realize I just made it through the millions
I'm just another rat that made my cheese
And you couldn't stand it
But what can all the big cats do
When all the rats wanna get fat
But try to cut down on the cheese
What you don't realize is that you're jerkin yourself
Killin your own existence
You're all walking dead men, and don't know it
With book sense and street sense
If you had street intelligence
You would really know
That you're one footstep between life and death
That the mouth is a open grave
And you've offered me the right to elect you to a bullet
Which is a straight shot to the top, right?
And what goes up must come down
That's why it's goin down right now
You can smell the smoke
See the flames
And see the bodies that are left on the ground
Because the flag
Red, white and blue
And the stars from all the years you've whupped me and mines
I still see
Explain lyrics
Correct lyrics 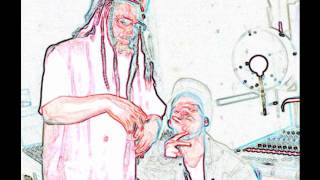