You see, I'm a party pooper

Yes sir, Project Blowed
What are you?

Huh, I'll have blood oozing out the doll in paint
Leave the lub fuming and you'll file a complaint
When the next ? of human style is a faint weapon
For me to hinder the growth
Is my civil duty
I'd rather you find your inner beauty than wiggle your booty
'Cuz there's mercenaries in all the blind spots
That could get my person buried in a pine box
Is it because my first person carries on all the time slots
Or 'cuz I won't treat a Virgin Mary like livestock?
I want a B-girl who praises Islam or Rastafari
Doesn't hang out with misogynist bar flies
Not an androgynous tomboy, or a lecturous lush
With an affectionate bust, who has a fetish to f*ck,
She'll give you genital warts full of infected pus
What'd you expect from Bus?
Of course I'm a party pooper
Your girl brings me Kama Sutra while I'm squeezing barley from her juicer

(Chorus)
I'm a party pooper, but you just want to squeeze on barbies' hooters
And try to please the Manarky's ruler
But the way I serve these emcees is harly a rumor

"Yeah man, we gotta get in this club tonight, get my drank on,
f*ck wit dem hoes, be on some hot shit"

Now what is hot shit?
A warm stool from the ? horn of a mule
Or a globe that conforms to the rules?
So I take these fools to reform school
Or go ahead and buy a new pair of pants, we'll do the square dance
You folks aren't given a fair chance to give the underground a glare or glance
But I'm certain that a rare chance will earn us shares and grants Like I'm certain that you're handicapped and can't hacky sack
Like I'm certain that your crappy raps won't get no handclaps
I'm sure!
Like a breakout of anthrax
Make you take out your tampax, stand back!
That's the way that the biters go
The more decimals on the check, the more special effects
But it's an inevitable letdown
Leave styles to make you feel like a vegetable from the neck down
These drum kicks, sound like several tech rounds being fired
Shooting in the canopy to stop the hootenanny

"Okay people, exit the club, there's nothing to see here"

See, they bite chunks of info when cypher punks go home driving drunk
For god's sake, snap out of it!
You dumb yuppies, Humpty Dumpties and young guppies
Your pop song's a satire of itself
Your war machine backfires and melts
He thought I was just a hired help but 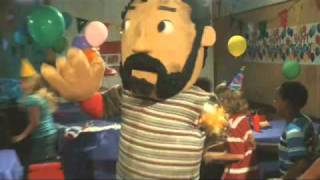