[Bun B]
Before I jump up out my silk sheets, and hop off in the shower
It's already understood, I got the money and the power
I grab the baby powder, under shirt and white tee
My Dickies, fitted cap and white one's that's me
A hundred karats worth of rocks, courtesy of Johnny
I roll a couple blunts, and load up the Tommy
Ready to get my stunt on, my pockets on swoll
Now all I gotta do, is see which car I'm finna roll
Now I can take the Benz, or I can take the Rover
And if I pull the Bentley Coupe out, then it's over
But I'ma keep it O-G, and pull out the slab
So I can sit on buck, and have some wood grain to grab
Last but not least, before I pull out on the scene
You know I gotta po' me up, my oily cup of lean
I've been stacking all this green, now it's time for some spending
I've been cool about this grinding, but ain't no mo' pretending

[Bun B]
Now if you see me in the shopping center, walking down the hall
It's already understood, that I'm buying out the mall
I got six homies with me, and at least two freaks Man we looking for the Louis, and the Gucci boutiques
I keep the flyest footwear, and the newest Locs
And if I get some'ing for me, I'm getting some'ing for my folks
Cause we all gon be fitted up, we all popping tags
We all walking out of this mall, with big bags
And I ain't gotta brag, you can see it for yourself
I got ballers on my right side, and ballers on my left
We ain't from the same hoods, but it's all to the good
We bout getting this money, like some real G's should
And we ain't knocking nobody's hustle, why plex man
You only hate on yourself, when you hating on the next man
You can't be like Bun B, so why try to
Get your own bread, and you can ball just like I do

[Bun B]
Before I pull up to the valet, and hop out of the car
It's already understood, that we buying out the bar
It's a line around the corner, people trying to get inside
But a playa like myself, is finna walk right by it
Now move the velvet rope, and keep the scanner
You don't wanna see us angry, like we David Banner
2000 and 5, Tony Montana haters
Ain't no need for you to knock us, just congratulate us
We done made it out the ghetto, by staying on the grind
We focused on the paper chase, with money on our mind
Now we just wanna shine, buy some bottles and pop em
So if you see niggaz out there, playa hating then stop em
Cause we don't really wanna have, to bust a motherf*cker's head
We just wanna holla at bad bitches, and spend this bread
We buying everybody drinks, and making it rain
Cause I'ma rep, like a motherf*cking underground king 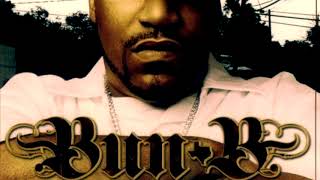