Wake up, wake up
Wipe the sleep from yo' eyes
I feel stinky .. not because I ain't washed up
Because I'm crowded by immense clouds of bull{shit}
Hmm

[Chorus]
A lot of brothers be screamin out
They draw from a solid foundation
Hollerin out different gang nations
I'm patient, I stand firm
My heart's racin, bullets grazin, it's amazing

[Verse One]
A road, scrolls through the cracks of concrete
Broken glasses under my feet
Respect for nature seems to be obsolete
I feel cheap, peep - peep
My people take but don't give
Some get past the street, some forget about the crib
and where they used to live
They say you'd do it too, if you only knew what I knew
Cause everytime I come around I hear the sound of the full clip
Unload, unload, reload, huh
Explode the stray bullet caught the shorty in the back
That's wack - he never got to finish his second lap
on the schoolyard track, and
never got a chance to compete in the spelling bee He worked so hard to see
His parents knew about gang violence
but never thought it could be their kids silenced.. silenced..

[Verse Two]
Down the block, shorty talk a lot
A swoll head, blowin up the spot
I got this I got that, cops heard about the drug spot
as his lips poppped, and even as he dropped dime
Lyin, on the nation operation
Just to save his own {ass}
from that green grass long break downstate, heh
I'm straight - at least that's what he thought
Caught by those loose words, that travelled back to the hood
And O.G.'s understood, it was time for pay black
On his head back was a Bounty, for the quicker-pick'm-upper
For him and his brother (yeah)
It's a sad song, but crime goes on
In the streets of Chi', brothers die in the dope game
Ain't {shit} changed but the name
The game remains to be the same..
The game remains to be the same.. it's true 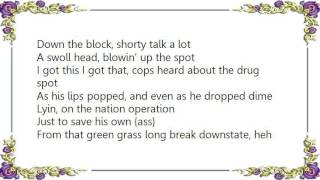 check amazon for It's Amazing mp3 download
browse other artists under B:B2B3B4B5B6B7B8B9B10B11B12
Record Label(s): 2001 The Beat Bank
Official lyrics by