[Grisly voice]
Yeah, the Baby Killa's back up in this mothaf*cka...
Straight from tha grave, it gets so deep right under the Garden Blocc...
Oh, me? Ya can just call me Manson...Yeah, we met before...
But ya forget that I ain't gonna die so I'm back up this mothaf*cka...
So peep the mothaf*ckin' words from the dead man, yeah...

[Brotha Lynch Hung]
And when I pack me a gun and, oh, when I was young
I dreamed of feedin' them niggas niggas with a suflet a la gun
Mothaf*ckas get hung, my bullet weights a ton
The Garden Blocc Don, the valley of the slum
Tha cannibalistic nigga that got that 9 millimeter gun
That nigga that nigga that got them mothaf*ckas on the run
They thought that I was done but Lynch is not the one
To go out from a gunshot wound, nigga, I'm not done that soon
Bitches, they come but nut just like the rest, caught one in the chest
Shoulda wore a vest and, oh, what a bloody mess
Puffin' off the cess, dealin' with the stress, killin' off the less...
Fortunate but they trip when my nine gets sick
Them niggas either die or stay stuck on my dick
Cause I'm that nigga they call Lynch, I got'em niggas fiendin' for my shit
I empty clips, drinkin', f*ckin' with tha splift
And it's the nigga that kill for reason, it's the Season Of The Sicc
That's why I got the urge to shoot that p*ssy clit
And kill off that infant, so what is my intent?
To show them mothaf*ckas livin' life ain't shit
I gets to gettin' real sick and eatin' bloody clit, the baby killa shit
Put 'em in a grave with an empty 40 ounce bottle and don't leave a drip
Cause livin' with tha Tripple-Six
Ya learn to f*ck devil in his mouth and eat the shit out of his bitch
And I admit: my brain is kinda sick But now I'm like J. Dahmer, I'm chewin' up all the evidence
I killed to cure my fit, the human meat fix
Bitin' to the skin rips, that sick nigga, so sick
Livin' dead ever since...

[Grisly voice]
Yeah, do ya wanna know what that Siccness is?
The Siccness is when you hug your mama and ya dick get hard
Or you walk in on your baby's mama and she's suckin' your son's dick
That's the mothaf*ckin' Siccness...
So, ya mothaf*ckas don't ya forget that shit...
And don't forget where the Sicc came from...
That nigga Lynch...

[Brotha Lynch Hung]
I take my mouth off up that cog and trip
Cause eatin' dead p*ssy clit I make ya sick
But it's the Season so my reason is legit
I'm havin' fits, I dreamed of eatin' bloody p*ssy clit's since I was six
I fiend for a dead p*ssy on dick, I gotta skits
Meanin' I don't give a shit about ya biyatch
That nigga that's from tha Blocc, killin' up tha cog, so, nigga, shii-it
Baby barbeque ribs and guts and, ah, don't let me get too deep
Fryin' baby nuts, sluts get ate out alike, dank is what crooked teeth heard
I pull the Tampax-string out and straight put in work
It wouldn't work without that sick, so page a nigga quick
So I can serve ya some of this shit and have ya murderin' ya biyatch
Cause me and Triple-Six grew up f*ckin' bitches up the gut
With tha 9-millimeter clip, Season of the Sicc, picture this:
p*ssy meat ripped in a pan full of nuts and guts and intestines and shit
I gets ta chewin' on tha clit, the sick, they just don't understand it
It's so outlandish, chewin' nigga nuts to cure my fit
The human meat fix, bitin' 'til the skin rips, that sick nigga, so sick
Livin' dead ever since... 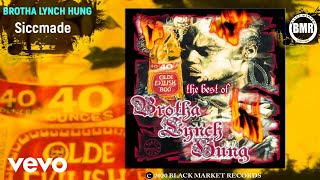