[Verse 1: Brotha Lynch Hung]
Send'em finna get butt naked (grrr)
I don't know what happened, see I just saw a house
An a lady up in the backroom
An a cocaine had me dizzy I was hustle off that wet cigarettes
So I don't know that gon do givin a nigga a permenant tattoo
I spit poison, niggas call it kentrail, I'm mobb deep nigga an I think I got sickle cell
Anyway, got to stay focus, got make sure this bitch gon smell
I'mma cut the head off, send it to myself in the mail
Bitch, it ain't no helpin' to yell, you gon make it quick a bitch
Chewin muscles like lickerish, you wanted to die you'll get yo wish you bitish,
Human meat is my favorite dish, and I bitches for kicks
(Grrr)
I'm a tyrannosaurus rex, unpredictable I dont know victim's door next
Get the stick in you torso or more so, cut'em up it was the main course tho
Zip'em up an lock'em up in the zip lock cloth.

[Verse 2: Brotha Lynch Hung]
(Grrr)
Now I'm smokin' on some loud, head up in the clouds (coff)
An I get to the gas station, ride hella miles
Put the body somewhere
Cut up the bodies nigga, I'm leave one there and one there
It was sum like a nightmare, kiss her and slit nigga,
I don't fight fair or might there
I told you I be high
24/7 always hella drunk and ready to die
Turned up
Sum's wrong with my head I might be burnt up
Brain tells gon extra ending the game all long
Twelve o clock midnight I run through ya house
Opposites is quiet as a mouse, we in ya hall way
An I'm eyed grape in the garage I waited all day Scratchin' at ya dressa with a knife
After I'm done it's about to be a messenger tonight
Kept runnin (runnin), the bitch she made a left and a right
And you can tell by the smell it's a murder session tonight.

Chasing his mother through the house

Continuing chasing his mother through the house 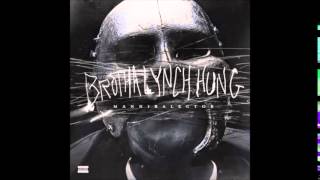