The Pope Of Chili-town Lyrics

The Pope Of Chili-town
Broadways
Into The Woods - Last Midnight Police Song Jonathan Kozol Was Right I Think That I Shall Never See... I Hear Things Are Just As Bad Down In Lake Erie Fuck You Larry Koesche, I Hope You Starve And Die Someday Everything I Wanted To Know About Genocide I Learned In The Third Grade Dropjaw Broadway And Briar Ben Moves To California
The Pope Of Chili-town video Broadways twitter

The Pope Of Chili-town Lyrics


stormy seas closing in american society will never be the same again
do you remember what it means to be free?
do you remember when theft was the only threat to private property?
now the cops are stormtroopers on parade
swat team nazi repo men machine guns and grenades
martial law is coming in time the seizure of your home?
they need not charge you with a crime, how can an american feel safe
when police authority runs virtually unchecked?
and how can a human being ignore legislation that signals the cops declaring war on the private citizen?
there is a bill being discussed right now that would bring the army into the interior of our country andd o you know where we'd be then?
our every move observed by uniformed militia men
machine guns on every corner and unbridled state of martial law
it's just a little too late to write your congressman
justice for and by the people is long gone
and you can smile dumbly about the rights that you still have
but you're living in a dream
just keep your tv watching jenny jones
your fridge filled up with beer and you'll n ever even hear your neighbor's scream
until it's you
until it's you. 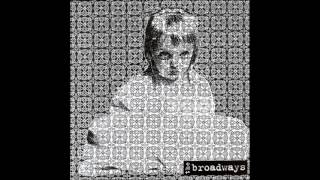 check amazon for The Pope Of Chili-town mp3 download
browse other artists under B:B2B3B4B5B6B7B8B9B10B11B12
Record Label(s): 1998 The Broadways
Official lyrics by