[Derek X/Sadat X]
Once again as we swing this ep' with the Grand Puba
If I seen you kick it once, I seen you slam it a thousand times
You gots ta flow with this one G

Dem say, who can busy like dis man?
And if dem search the whole land dem not find a man
Puba is the one to make dem fly girls have a ba-all
Wha-oh-eee!
See other-dem MC's, dem not scare me
De virgins say me can't wait to hear me
You want it done right, den give Grand Pu' a ca-all
Not let me get busy on this one..

See brothers be wishin that's why they're eager to listen
Tryin to do me but see they're no competition
Grand Puba's the type, to get hype, to any funky sound
Never the type, to give a damn about a hand-me-down
Papers of rhymes of mine are stacked high like lumber
If hon wants to swing ep', she takes my beeper number
The skills go back to the days of flippin coins
Pasttime readin books by my man Donald Goines
But I'm not a pimp, and I don't walk with a limp
You can say I know the game, cause I know how to treat a dame
So knock three times on my ceiling if you got the feeling
Grand Puba's good for sexual healing
Lord have mercy this is lovely, I'll say splendid
Puba's on the stage, and I'm glad you all attended
Rhymin to the beat, is the way I make my money
I'll buy, sweets for my sweets and, no sugar for my honey
Brothers get, played for their papes
And if a stunts tried to play me, I'll hang her like some drapes
Puba's the man, and you can't run the flam
So take it elsewhere, my dear
See others try SO HARD to be this
Competition tries SO HARD to see this
But I let em know, I'm not the one
So see the next one, wha-oh-eee! Whoa!
I'll slap five to a brother who ain't about no jive
I'll smack ten to a friend who hooked me off with skins
See I'm the type of brother and I like to have fun
She said, "69," I said, "68, and I owe you 1"
The style I kick, you will remember And when I step to other rappers, you better yell timber
cause they're fallin, de-meene-meene-mee
They're fallin..

See it doesn't really matter if the place is big or small
Cause MC Grand Puba come fi rhyme dancehall!
I'm flippin the wigs of those who gig
I never renege on girls who dig
The super supreme, one of the team of three
See I'm one of the best with most finesse
I really suggest you do not mess
Or try to test the very best at this
Do you really wanna know what's next? I gotcha gotcha gotcha
Grand Puba is one of the best.. I rocked ya rocked ya rocked ya
Here I step, with the rep that's kept
In a orderly fashion, sucker MC's I'm mashin
It's only one more verse I think that really need to be said
It's that I'm bad, bad.. inna wicked in bed
La la la la-la la, whoa la la la la-la, la la
La la la la-la la it's the Grand Pu-ba
Now hit me now selector!

Who can busy like dis man?
And if dem search the whole land dem not find a man
Puba is the one to make dem fly girls have a ba-all
Wha-oh-eee!
See other-dem MC's, dem not scare me
De virgins say me can't wait to hear me
If you want it done right, then give Grand Pu' a ca-all
Not let me get busy like this.. 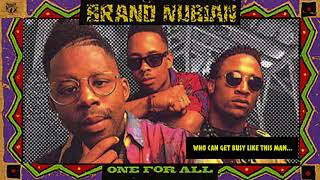 check amazon for Who Can Get Busy Like This Man... mp3 download
browse other artists under B:B2B3B4B5B6B7B8B9B10B11
Songwriter(s): MAXWELL DIXON
Record Label(s): 1990 Elektra Entertainment, A Division of Warner Communications Inc for the United States and WEA International Inc for the world outside of the Uni
Official lyrics by