"Mercy sakes alive, looks like we got a convoy."

It was the dark of moon on the sixth of June, In a Kenworth pullin' logs. Cab-over Pete with a reefer on, And a Jimmy haulin hogs. We was headin' for bear on I -10, About a mile outta Shakeytown. I said: "Pigpen, this here's the Rubber Duck, And I'm about to put the hammer down."

"Breaker there, Pigpen, this here's the Duck. "Listen, could you back off on them hogs a little bit? "Ah, ten-four, Pigpen, about five mile or so. "Roger, them hogs is gettin' intense up here."

By the time we got into Tulsa town we had 85 trucks in all, There was a roadblock up on the cloverleaf, And them bears is wall to wall. Yeah, them smokey's thick as bugs on the bumper, They even had a bear in the air. I said: "Callin' all trucks, this here's the Duck, "We a-gonna go a-huntin' bear."

"Ah, you want to give me, Pigpen? "Ah, ten-four, Pigpen, you're still too close. "Yeah, them hogs is really startin' to close up my sinuses. "Mercy's sakes, you better back off another ten."
Well, we rolled up Interstate Forty-Four, Like a rocket sled on rails. We tore up all of our swindle sheets, And left 'em sittin' on the scales. By the time we hit that Shi town, Them bears was a-gettin' smart: They'd brought up some reinforcements, From the Illinois National Guard.

Armoured cars an' tanks an' jeeps, An' rigs of every size. Yeah, them chicken coops was full of bears, And choppers filled the skies. Well, we shot the line, we went for broke, With a thousand screaming trucks. Eleven long-haired friends of Jesus, In a chartreuse microbus.

"Ah, Rubber Duck, this is Sodbuster. C'mon? "Ten-four, Rubber Duck." "You wanna put that microbus behind that suicide jockey? "He's haulin' dynamite and he needs all the help he can get."

Well we made a sprint for the Jersey shore, Prepared to cross the line. I could see the bridge was lined with bears, But I didn't have a doggone dime. I said: "Pigpen, this here's the Rubber Duck, "We just ain't gonna pay no toll." So we crashed the gate, doin' ninety-eight. I said: "Let them truckers roll."

We got a big ol' convoy rollin through the night. We got a mighty convoy: ain't she a beautiful sight? Come on and join our convoy, ain't nothin' gonna get in our way. We're gonna roll this convoy across the USA. Convoy.

"Ah, Pigpen. What's your twenty? "Omaha? Well, they sure oughtta know what to do with them hogs out there. "Mercy sakes, good buddy, we gonna back on outta here. "You keep in touch. "Keep the bugs off your glass and the bears off your tail. "We'll catch you on the flip-flop, Pigpen. "This here's the Rubber Duck, out." 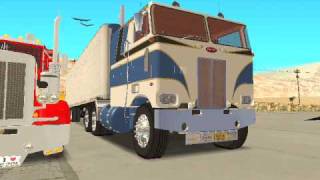