Catch A Bad One Lyrics

Catch A Bad One
Boss
Rilla Go Lady Calling You Comin' To Getcha Livin' Loc'd Deeper Love Is All There Is Run, Catch, And Kill Recipe Of A Hoe Progress Of Elimination
Catch A Bad One video Boss twitter

Catch A Bad One Lyrics


AK 47, Mossberg - buck buck from the glock!
Any motherf*cker that step up f*ck around and catch a bad one;
Bo$$ is in the house! Slaughterhouse, do this shit!
Prepare your motherf*ckin selves, cause the shit is comin!
It's a motherf*ckin, STORM! So Bo$$, and Dee, f*ck that shit!

[Dee]
I got you motherf*ckers scared, in the midst of a dead heat
Back the f*ck up, or get played like Monopoly
Bo$$ was the shit from the getty-up, yeah huh
The Dee was the shit, the minute my father straight bust his nut
He created a mad bitch, and now it's for the nigga to pitch a bitch
cause I was known to be that misfit
Or the black sheep, of the family
Sent to reform school, since my parents couldn't handle me
I did nothin but.. dirt
While all of my homies played worse
I was hittin niggaz, where it hurts
In the back of they dome, I had a nickel-plated chrome aimin
I didn't have no home trainin
But back to the drawing board
Back in ninety-three, when I was released out the mental ward
for playin games with helter skelter
That's how his ass got, done - he caught a bad one

[Bo$$]
The only shit I ever had a lot of in my life was some bank moves
I needed loot so I said f*ck it, and started pullin gank moves
I ain't the type you wanna trust or turn your back towards
So never slip you stupid bitch (or I'm gettin yours)
Schemin with my chrome, boy
The Bo$$ got an AK, aimin like a temp at your dome boy So f*ck a homeboy, we was never down fool
{We blazed blunts!} But that don't mean we f*ckin cool
See I was taught at an early age it pays to get a gauge
In the streets, they try to play a nigga weak
I'm buckin 'em down with two shots
And f*ck your road dawgs, got enough bullets for the whole block
And now the city bitch is pretty pissed, rollin in my Lincoln
Leavin blood scattered when I'm creepin (when I'm creepin)
Now everybody's scared - I fill 'em full of lead
Bullet wounds to head once I buck 'em dead

[Dee]
Two to the head, that's exactly what you get
whenever you f*ckin with a lunatic
I'm out to be gettin deep down in your shit
See my sisters are easily tempered
Therefore I don't be givin a f*ck
Anything that moves I'm buckin 'em down

[Bo$$]
You better duck duck down from the bullet
Real G's fingers on the trigger, and still afraid to pull it
Look around, bitches on a underground level
Listen to my cut as the buckshot settle

[Dee]
And the blow to the dome buck buck was the sound of my nine
ringin out, then I draw them in the slaughterhouse
to get slaughtered, blow 'em out the water
Real quick in a hurry, cause niggaz be actin scurry

[Bo$$]
In my hood, wish you would, pull some punk shit
Bitches up to no good, niggaz better duck quick
Run up if they come, gettin paid by the gun
You slept around, you f*cked around - you caught a bad one 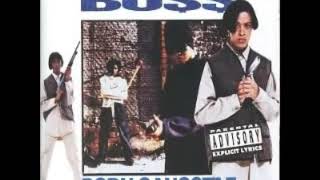