We Ain't Got Much Lyrics

We Ain't Got Much Lyrics

When I was young my favorite movie was Menace
Cousin' go to sleep, I'd be takin' off his tennis
f*ckin' with the hood girls at the pool swimmin'
When I was half swaggin', when I had no rhythm
It's the hood, I was born, every night we had suppers
Gamble 'til the sun come, I guess we all hustlers
Everybody had a flame, mane, we all had crushes
Happy if we had mayonaisse, never had mustard
Walked to the movies, stop and eat, Louie's
Steal a couple bicycles 'fore I make it home
Can't let mama see the bikes, so I park 'em 'round the corn'
Diggin' all the gangsters who was ballin' on the corner
Know they gon' pop it off 'cause our f*ckin' block rolled
Daytons and Vogues and Keith Sweat on the speakers
Back then we ain't even listen to the f*ckin' teachers
Mad, mom the only one up in the bleachers, where's dad?
Still, we was grateful for the times we never had
I say a prayer every night that my cousin' hit up on the dice
And get him some cash

Heat the water on the stove, make it hot (Make it hot)
Make the water bubble up when we fart (B-b-rb)
Police puttin' handcuffs on my pops
So I cried on Holly Road in '93
Long as we had granny seemed like we had peace
How y'all smile that happy when y'all got that least
How your hair that nappy and it just got hit
I remember Jeanie sayin', "Boosie, brush that shit"
Walkin' to the sto' gettin' granny her tobacc' (Ayy)
f*ckin' with the youngest they would always bring me laughter (Ayy) Cross a nigga over, step back, hit the three
But the ball had lumps, it was hard, but it was sweet
Thirteen, fourteen, we shot the two in the three
Never used rubbers, we was happy we was f*ckin' (Yeah)
Used to steal our dealers Polos, I was cuffin' (Yeah)
I can't afford the Js, but I'm gon' get 'em from my cousin

Ever had to pass Jordans to three friends?
Four people f*cked up, two shots of Henn?
Watchin' dice games, hopin' that your potna win
Knowin' if he lose, he get mad and he wanna sin
We was sleep on the school bus
I guess we all had our lessons 'cause the tool tucked
Everybody like, "Damn, we done grew up"
Get your money, what the OGs schooled us
We ain't had nothin' but some dreams and some f*ckin' gold chains
And some nugget earrings and a slap
Today I'm goin' get some pickle chips and a fifty dollar flip
'Cause right now, shit, that's all a nigga have
Ride down the levee, treat my bike like a Chevy
Got them rims on it, dustin' pretty as I flipped (Boss)
Bronson brought me K-Swiss, bitch, now I'm flexin'
I remember when I got my ears pierced, I was eleven
Prayin' every night makin' sure we go to heaven (Yeah)
Watchin' dad squeezin' on his three-five-seven
Granny said we got a blessin' comin'
She always said we got a blessin' comin'
But it ain't even 'bout the money
Go to church on Sunday, my grandpa was the preacher
Died when I was eight and we cried, me and Trina
The police killed Pernell and the whole hood cried (Yeah)
But the hood got stronger every time somebody died 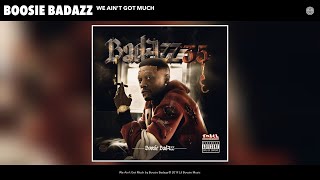 check amazon for We Ain't Got Much mp3 download
these lyrics are submitted by gsba1
browse other artists under B:B2B3B4B5B6B7B8B9B10
Record Label(s): 2019 Lil Boosie Music
Official lyrics by