Cocaine Fever
Boosie Badazz
Marijuana Me, Myself & I Real Shooter Don Dada I Hope You Make It Motherless Child Trust Nobody Wrong Role Model You Don't Know Me Like That Fly Away
Official page Cocaine Fever video Boosie Badazz twitter

I'm a f*ckin' 80s baby, so really I get it
My cousin pushed the weight, while my family smoked the crack rock
Heard mention my heart when my favorite uncle smoked the crack rock
Now his super bowl ring gone for the crack rock
Daddy never comin' home, man that shit strong
You ever smelt a dirty dirty, man that shit strong
Have ya head twisted when that shit hit ya home
Sister sellin' p*ssy 'cause she can't leave it 'lone
I'm from a family tree of hustlers, playas, felons and fiends
When they tell ya that you can't get rich, it's just a dream
Well here it is, nigga, nobody believin' in they self
You know what that is

Damn, that lil girl crazy, (yup) that's that coke up in her blood (yup)
Her mama used to pop all them pills with her daddy in the club
Damn that lil boy don't pay attention, shit his daddy was the plug He been havin' eyes on him since a cub, coke affectin' him
Look at Bobby cocky, Bobby, you done got slim (damn bobby)
Them hoes gettin' turnt out, pimps done lost money (damn hoe)
I ain't nun but nine or ten, but I know what it is (what it is)
I just found a crack pipe and I know it's his
In 1997, ('97) they had a rapper out New Orleans
Used to talk about snortin' dope (snortin' coke)
He dropped that Chopper City and every youngster from Baton Rouge to that city
They was snortin' coke

First the coke was high, then the rich got treated
Turnt it into crack, and the prices got cheaper
Frames got small and our brains got weaker
The money off the crack made us kill our own people
I did the same thing, I used to serve my own people
Never in my head that I murked my own people
Niggas tryna eat, hustle coke like it's legal
2005 was live, Jeezy heated up the fever
Now Boosie got the fever now 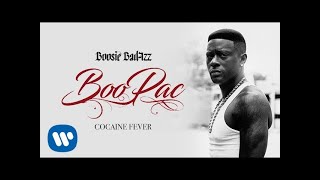 check amazon for Cocaine Fever mp3 download
these lyrics are submitted by BURKUL4
browse other artists under B:B2B3B4B5B6B7B8B9B10
Songwriter(s): TORENCE HATCH, EDWARD SHARPE-RAYMOND
Record Label(s): 2017 Atlantic Recording Corporation and Trill Entertainment, LLC for the United States and WEA International Inc for the world outside of the United
Official lyrics by