I don't take no crap from anyone else but you,
I wear the pants around here when im finished with your laundry,
Cause I'm a guy you don't wanna fight,
When I say jump you say, "Yeah Right!"
Im the man of this house until you get home

(He's the man, He's the man) And I can have sex any time that you want,
Cause I'm a man who has needs but they're not that important,
And don't expect any flowers from me cause if im not mistaken you perfer jewlery,
I'm the king of my castle when your not around,

And I'll drink and watch sports whenever I want to get in trouble,
And I'll come home when I'm good and ready, to sleep on the couch,
Cause a MAN's gotta do what a MAN's gotta do,
and I'm gonna do what you tell me to,
Because I'm top dog around here but I've been nutered!! 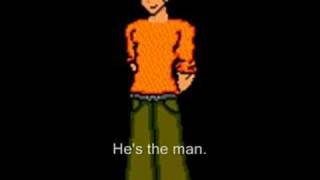 check amazon for The Man Song mp3 download
browse other artists under B:B2B3B4B5B6B7B8B9B10B11