eLyrics B Blinded By Faith Lyrics


Conquerors burn the chronicles, archives are erased in
auto-da-fe
The invaded ones lose their past and identity
As the scribbles embellish the legend of the strong
Slaves are doomed to kneel and stay mute
The dead don’t talk.

Elites recreate reality for their own profit
In the dark, cold blooded liars tangle the tracks
Disfigure effigies and pull the strings
Make the puppets dance a grotesque waltz

Reality is writing in blood and tears
Learn to perceive what’s beyond the evidence
Tear the blindfold, lift the veil Chase out the spies that lurk behind the wall of Shame

We are told what to thing and who we must hate
Force fed with sentences with no sense
Like “the land of freedom versus the evil axis!”
Vain rhetoric, shallow speeches… We’re sick of this
shit
But for sure, we’ll hear it again
As long as the media’s diarrheas will be poured in our
brains
The question in not “are you free to speak?”
But “can you afford to be listened to?”
The Star – Spangled Banner can be a gag, such a useful
tool…

It’s time to break the door open
Nor more eavesdropping
The game is over, we’ll wreck the plan. 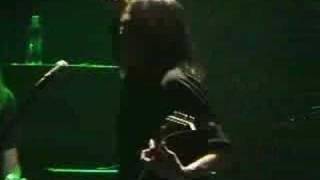