It's Over
Black Soprano Family
Grams In The Water Valerie In Love With The Streets Quarantine Ricky & Fonz Da Mob Paulie & Vito
It's Over (feat. Benny The Butcher, Heem & Rick Hyde) video

It's Over Lyrics (feat. Benny The Butcher, Heem & Rick Hyde)


[Intro: DJ Drama]
Gangsta
Brought to you by the Butcher, nigga
These are the real Sopranos
Cannon

[Verse 1: Heem]
Was takin' penitentiary chances, now they hit us with advances
Got them niggas mad, hatin', can't stand it
Down bad, I ain't panic, now I'm doin' shits with Don Cannon
But I'm the same nigga used to tote cannons
Hit the coke with Arm & Hammer
'Caine so hard, we need a hammer
Play the crackhouse with cop scanners
Known for sellin' glass, every gram I cook sold fast
Quarter brick and a vision where it glass
Runnin' from my past, Henny to the top of the glass
Won't stop 'til I'm top of my class
Had a Glock in the stash next to a box full of cash
Hit a lick, used a stocking for a mask, this real shit
Rumors spread from the ones I used to chill with
Get fake vibes from niggas I kept it real with
We was ridin' four deep tryna kill shit
Blow a nigga brains out and don't feel shit (Sopranos)

[Verse 2: Rick Hyde & BENNY THE BUTCHER]
2015 was the year, no regrets, no fears
We was running through the dope
I turned eighty into hope
Plus I showed these motherf*ckers they ain't wavy as the G.O.A.T.
Now the label pay me for my quotes
Plus I'm flyin' in with elbows like I'm jumpin' off the ropes
All this money I'ma gross, I can feel it gettin' close
You can call me Raekwon 'cause I'm comin' with the Ghost
They was callin' me a legend 'fore a nigga even spoke
They'll be callin' for the reverend if I hit you with this toast (Cannon)
I say the word and the apes all come out
Now it's shells everywhere like a baseball dugout
It was grams everywhere 'til the eighths all run out
Uh, I prophesize my profit rise I can't concern myself with y'all like it's ostracized
Every two or three thousand gave me the cautious vibes
But I been backed up
Soon as the ink dried, I was ten racks up
I'ma make another sixty on 'em, then stack up (Yeah)
Black Soprano for the win, nigga, fin
[Verse 3: BENNY THE BUTCHER]
Better save more than you spend, stack up and do it again (Nah)
You was only good for a season like Jeremy Lin
Both hands wasn't enough to count it, needed a twin
Decorated the garage with horses like Ralph Lauren
My train of thought still stuck on all the cocaine I bought
I don't get into to all of that famous talk
Disposable cash
We unapproachable sociopaths
A run-in with us supposed to go bad, but I evolved
Now look at me, I'm a boss, gotta book me with all my dogs
Chose the streets 'cause she the one took me with all my flaws
Why listen to fools talkin'? In kitchens, I'm moonwalkin'
Feds hate, there's red paint on all of her shoe arches
Every house on my block was hot 'til I moved off it
Like Drew Brees, I took the lead with a few tosses
New charges, it ain't over, though, it's just beginning
I'm Curt Schilling
Lookin' from the dugout, goin' for extra innings
I turned my hobby to a separate business
Sick of those detective visits
Poppin' up at shows just to question niggas
Who knew the game ain't have an exit in it?
I took a fork, whipped it once, when it stiffened up, I left it in it
Let's talk bags I got in mind today
I wrote this verse in the shirt I had on when I signed to Jay
It's over, ah
[Outro: DJ Drama]
These are the real Sopranos
And like that
We gone
DJ Drama
Black Soprano Family
Well respected
For life
Explain lyrics
Correct lyrics 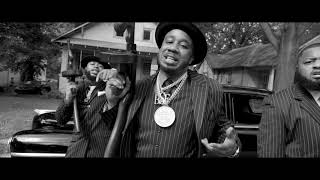