[Intro]
These are the real Sopranos

[Verse 1: Rick Hyde]
Look, I just spent a quarter chicken, now I'm worth a quarter ticket
Put a quarter in my baccies, give a quarter to my bitches
Ever since a quarter century, I been rakin' up the digits
All these dollars out of quarters, I should give a course in vendin'
Brought the razorbacks like Arkansas, then Butcher taught me blend it (Whip, whip, whip)
Turn a four into a seven, then you hit the block and kill it
That's how I fed my mama and three other lil' siblings (Facts)
Not to mention my children, shit, everybody winnin'
Took a gamble just to get here, the risk takers gon' get theirs
Or I'm gettin' a checkerboard AKA a big square
Break it down in fair chances, then we goin' square dancin'
From Charlotte back to New York, in Miami like I'm Ant Mason
Black Soprano Family with the leverage is impeccable
You rappers is unethical, turn niggas to vegetables (Boom, boom, boom, boom, boom)
Matter fact, nigga, shoot yourself with it, Plaxico shells (Brrah)
Hotter than Mexico, feel it on your chest like a stethoscope (Sopranos)

[Verse 2: Heemer da Steemer]
I love the game, I'm from the streets (Streets, nigga)
I survived some murder beef, ever since then, I play for keeps (Keeps)
I'm shootin' everywhere the laser blink (Brrr)
Drums on the .223, shuttin' down the motor on the V
So be careful ridin' down them streets (Careful)
And, nigga, bring your biggest gun when you think you're runnin' down on me (On me, nigga)
I'm with some niggas that'll die for me
You gotta look me in the eyes when you tell me you gon' ride for me (Mean the shit)
It's time to tell my side of the story (Look)
A nigga came off the bench, but I got rings like Robert Horry
I made movies, but ain't record it
Spray thirty-something shells, clear the scene before it get recorded (Out of there)
Movin' cautious, I can't afford it
Raised by them real trenches, catch a body and you get rewarded (Kill 'em, nigga)
Pushin' grams, tryna make a fortune
Had a couple bad runs like the Bills when they had Losman
I need the Rollie with the bezel frosted (Shh)
Havin' triple beam dreams, reminiscin' when I sold frosting Me and my opps like LA and Boston
I thought of that one on the plane, on the flight from LA to Boston
Sippin' D'USSÉ with the double crossers (Don't cross us, nigga)
The way we do you, think it's voodoo, so be careful 'fore you double cross us
You run your mouth, my guns talkin'
Place a bounty on your head, now you just a dead man walkin' (Sopranos)
[Verse 3: BENNY THE BUTCHER]
Yo, look
They told me I'm playin' with fire 'cause I ain't throw my phone away yet (Phone away yet)
I'm in deep, the hustler instinct ain't go away yet (Still got it)
I kept a hammer in the bubble coat, on the east side of Buffalo (Yeah)
The forty made me trigger happy, my plug made me comfortable
Hit the lot, then I'm coppin', ain't nothin' to guess 'bout this shit (Nothin')
I don't even know the price, I need to test drive the whip
When you was stressed 'bout a bitch, my team was fresh out of bricks (Yeah)
Cop it in Miami at the Best West' by the strip (Brr)
Your bitch hit my phone, and she don't want nothin' specific
Hoes know I'm ballin' like the US in the Summer Olympics
I played the strip 'til the mail came in, Chancel fragrance, Hell raisin'
Nigga, my hood full of shell casings from twelve gauges
Let's see who really rivals, if your city really follow (Let's see)
I'm in the lab, writin', ashin' in an empty Henny bottle
I had a spot in all hoods (All hoods), had my pockets all full (We eatin')
'Til rap made me more political like Pac before Suge
This flow got me enemies, I don't speak to half y'all (f*ck y'all niggas)
I got weaker rap squads doin' features half off, yeah (Hahahaha)
No cops when I hit the scene, popped up with Rick and Heem
Mask, no vest, just a mop like Mr. Clean, ah

[Outro: BENNY THE BUTCHER]
These are the real Sopranos
Big BSF, nigga
All my niggas is Capos, nigga
We take this Black Soprano shit serious
Real shit
Shoutout my nigga City Boy
My nigga Rick Hyde, Heem
Produced by Shay, you a fool, nigga
Ah, 2020 mine, nigga, hahaha
Big BSF, Big Griselda in this motherf*cker
I had to come clean niggas up, ah
Explain lyrics
Correct lyrics 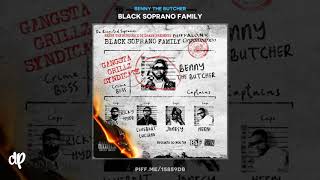