Things been said, plenty rumors been spread
Many many many new jacks got it in they head
that they can raise up on this and put the Kane in fright
Heheh.. yeah right!
Listen, you're just as soft as baby powder
Don't let your mouth get you in somethin
your rhymes can't get you out of
Some good advice is don't even come out my way
You better press up on Chucky if you're lookin for Child's Play
Cause I'm a grown ass man in total command
One of the best to ever be and
no other can ever take a stand
When I kick a verse the scene becomes so scary
that niggaz get quiet like a library
I pick up the mic like a hunter in hot pursuit
Oh you want some of this? Then put that mic on mute
Because you'll be in more danger than Penelope Pitstop
Point blank, you get your shit dropped
I got a death blow whenever I throw
With double impact to take out the whole row
Huh, I start swingin again and again
You'll hear so many "ooh ahhs" you'll think it was Boyz II Men
I break down, shake down, proceed down, beat down
back down, smack down, rip down, get down
showdown, throwdown, rundown, come down! *DJ rewinds*
Here's a little message for your own concern
You try to press up on this and get burned
A battle with a non-believe is what I yearn
Damn, niggaz never learn

If you ever see a jam playin you can bet that damn Kane
will make it sparkle and bubble like champagne Dom Perignon I'm the Don of the set
and I'll bet, that the girls, will agree
That the B, the-I-G, D-A-double-D-Y Superfly feel
like Ron O'Neal, gets ill, I got it goin on
Word is bond, I'm more Dangerous
than Michael Jackson - hah, sha-mon!
So, I don't attract with the wick-wick-wack
So take a step back, you new new, new jack
Cause young boy, all of your rhymes are pre-natal
Mines are fatal, cause I got The Hand That Rocks the Cradle
So stay in your crib pen, before you get did in
uhh, I mean done in, you gets none and
the last rapper to press up on me wrong was..
.. ummmm.. damn it's been that long!
So competin is not a smart decision
Cause I start to dissin, then start dismissin
You're tryin to battle with me well god damn scram
The style that you're usin is as old as a Trans-Am
Update yourself just like an 850
Shift see, oh what's the use you still can't with me
Many MC's tried their best to press up
But I guess, their best, wasn't goooooood enough!
I'm not Robert Townsend but every time I speak
I'll leave a rapper's chest beatin like he had Five Heartbeats
Knockin out comp like Rocky Balboa
And I make more noise than a lawnmower
For my stacks I worked hard to earn (* Kane starts rapping real fast *)
Bein the bigger the better the badder the boss
The brother to break em when bringin the bomb
to blow up the Boogie Down... * INHALES, DEEP SIGH *
Damn niggaz never learn!
Explain lyrics
Correct lyrics 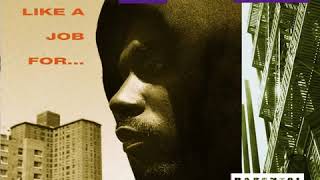