The kiss of death on a rap pick
Then you get a slap quick, so guard it with Chapstick
In other words, protect and hold your own
It only takes one punch to get head flown
Fists of fury, suckers get buried
Cause the Kane got more spice than curry
I am the flavor down on paper
And nothing could save ya, from catchin the vapors
Rhymes that'll sting your face like a quick jab
And I'm rubbin em in just like Vicks say I'm
captivatin, dominatin, innovatin, illustratin, fascinatin
Motivatin, elevatin, terminatin, mutilatin
Rhymes they're worth their weight in
gold, bold, never sold to a bidder
That claim to glitter, you're so bitter like kitty litter
As for damage, don't tell me what another do
Cause I quote that I'm R-A-W
So make room, cause fighters are doomed
Try to consume, and make your own tune
A grave from a casket, a tisket a tasket
You're rhymes out of basket, boy you get your ass kicked
For frontin like you hittin hard
when your arms are too short, to box with God
So don't even touch cause I come with too much
Address and bless any mic that I clutch
And for a rapper to challenge my freestyle
He must be senile, and that's why meanwhile
back at the ranch...
There goes the asiatic chosen one that's expandin with a new branch
So many slept on the nonchalant act
Now wake up sucker this is mortal combat

I seize and freeze MC's with these degrees
Put me to my knees, or at ease, chillllld please
I break it down, to bring on the next act
Rappers are so full of shit, they need Ex-Lax
So stop griffin, your mind is driftin
Prepare yourself cause I get swift and
captivate the crowd but you can't understand
At times I gotta say to myself, "God damn!"
As I get hot, and still be gettin warmer
And I don't have beef with no other performer
Keep to myself never bother another
But if a rapper tries to diss I crush the motherf*cker!
Frontin MC's that be tryin to rip
need to save it, and don't even play with
me when I react like a volcano eruptin
I step to you and say, "Now what's up?" then
every word'll be just like surgery Cuttin you open so rush to emergency
Or even bow to your knees and below
Or get played like a game of Nintendo
J-O-K-E-S ain't my style
I ain't a child that's why I don't smile
I combine a line designed to find behind the mind
so devine the other rappers resign
As I go on, from night to morn
Beginning to end, from Knowledge, to Born
Whenever rappers are lookin for static
Looks like a job for King Asiatic
An-y, send-me, competitors
Then again, it might just be better to
just slow down you don't wanna throwdown
I get busy, get you dizzy like a merry-go-round
Feel the wrath of a Big Daddy duel rhyme
And competition, prepare for wartime
Be alert for where I drop the bomb at
As I destroy you with mortal combat

I roll so bold with soul control the whole patrol
of folders molders towin black gold
So let it be said, let it be read
Cause I lead ahead, of others who rhymes are old as Pro-Keds
Tryin to diss the Big Daddy repetoire
Moi??
You steady screamin out a antique segment wrote
As I just play em like a pregant roach and STOMP EM
For tryin the forbidden
Your rhymes ain't hittin, boy you won't be gettin
none of, or in front of, cause every one of
my adversaries, lack, you little son of
o-bit-uary column, and read your name
If you ever try to step to the Big Daddy Kane
So any claimin or aimin to be champion
against me? Psssh, can't be one
I rank supreme and it's a rapper's dream
to scheme and fiend for my technique but redeem
Cause there's only room for one teacher
Wise words from a wise man'll reach ya
I teach freedom, justice, and equality
Peace to the brothers and sisters and follow me
Plenty poisoned minds of the people are ours
Slaves, from mental death in power
That's the reason before I drop this bomb
I say peace to the Nation of Islam 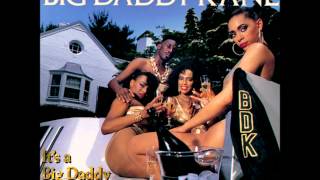