[Verse 1:]
You can try to run the planet
Or watch it on the news
Somebody's getting shot
The weathermans looking confused
He's reporting to a nation full of zombies
Strung out on Starbucks and bitching Abercrombie
Don't get it mized up, me too I have insomni-a, at times but don't be walking around here blind, feeling all around trying to find a righteous path.
It's a peelin when I rhyme so everytime I Hit the Bassist.
You Know the commonfolk, blue collar, day to day workers that squeeze a dollar, so maybe they can swallow, a little, not a lot, just enough to fill that bottle
But it's a million dollars a gallon for gas to get to work tomorrow.
That's if you gotta get it, can't swim and carpool, you rob peter to pay paul to make due, make you wanna write a note and take a pistol to that bank too, then pass it on the teller
But you know better

[Chorus: Mary J Blige]
They try to tell us to stay strong, but every day we losing jobs, from College Park down to Beverly Hills, Somethings Gonna Have to Give
Across the world they live in fear but it's the same thing over here.
If you can hear me on Capitol Hill, Somethings gonna have to give.

[Verse 2:]
The great debaters debate about whos the greatest MC's, subject matter don't matter because the verse is empty.
No food for thought, nothing for the brain to digest, so I guess it be about who can jive talk the best, but I give them light like the traffic I direct, aspiring they life like they was actors on my set as if I was a politic, I'm higher than a tent, I'd be a liar if I wasn't sick and tired of this mess. [Chorus]

[Verse 3: Mary J Blige]
Single mother in the swallows and it's no fun, but you don't really understand until you are one, a childs sick and he's losing his endurance, she wanna fix him but she ain't got no insurance.
Now we don't even wanna talk about the man's bite
Out on parole with the promise that he'll do right, but a felon has no chance for a new start, so it's back to doing hand to hand on his own life, and blacknights were all the same, and I know you feel my pain, and the only hope I have that help me deal with the drama, is that maybe in November
I'll be cheering for Obama.

[Deep Voice:]
The world is too big

[Big Boi:]
Free ya mind or be stuck like porcupine, left behind that's the bottom line, gotta find that grind because the time won't come back around, get it now!

[Deep Voice:]
The World is too big

[Big Boi:]
Step on the stars, while your reaching for the sun, but never burn a bridge, each one teach one
If you lend a helping hand, you may never need one

[Deep Voice:]
The World is too big

[Deep Voice:]
The World is too big
(Back to Mary J Blige)
But it's not that way
They been tellin us a dream
Tellin us were on the same team
Now We all gotta deal with the lies. 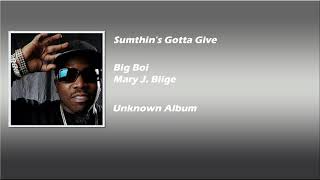