The Globe
Ben Sollee
Letting Go Something, Somewhere, Sometime A Few Honest Words Bury Me With My Car Built For This Copper And Malachite A Change Is Gonna Come How To See The Sun Rise Panning For Gold It's Not Impossible
Official page Ben Sollee wiki The Globe video Ben Sollee twitter


I guess they never told you how the Globe burned down*
But it ain't no secret, just ask around
Some heart-sick man fed up with his fate
Torched it to the ground in a desparate state
He'd grown tired of the tragedies
Tired of the death
Tired of watching Romeo take
One last breath
For something as crazy as love
The gave him all the books, but never taught him to read
So when she first kissed him, I heard him beg and plead
He saw the storm on the water, he felt every swell
He was on top of a mountain then in the belly of a whale 'Cause some days it's a fountain
Or an artesian well
Sometimes it's a bag of bricks
Or some kind of spell
There's nothing as wild as love
He wasn't much for religion, but he learned to pray
For occasions when the wine led his mind astray
He built a chapel for his conscience, a shack for his regrets
Sent desire to an island still he could not forget
The sound of her touch
The color of her song
A jumble of words
Where a space belongs
For something as simple as love 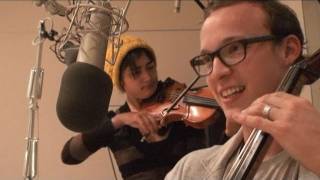 check amazon for The Globe mp3 download
these lyrics are submitted by musixm
browse other artists under B:B2B3B4B5B6B7B8B9B10B11
Record Label(s): 2011 Tin Ear Records
Official lyrics by