An Ulster man I an proud to say from the Antrim Glens I come
Although I labored by the sea I followed fife and drum
I have heard the martial tramp of men; I've seen men fight and die
Ah! lads I well remember when I followed Henry Joy

I pulled my boat up from the sea I hid my sail away
I hung my nets on a greenwood tree and I scanned the moonlit bay
The boys were out, and the "Redcoats" too--I kissed my wife good-bye
And in the shade of the greenwood glade, sure I followed Henry Joy

In Antrim Town the tyrant stood, he tore our ranks with ball
But with a cheer and a pike to clear we swept the o'er the wall
Our pikes and sabers flashed that day--we won, but lost, ah why No matter lads, I fought beside, and shielded Henry Joy

Ah! boys, for Ireland's cause we fought, for her and home we bled
Though pikes were few still our hearts beat true, and five to one lay dead
But many a lassie mourned her lad and mother mourned her boy
For youth was strong in that gallant throng, who followed Henry Joy

In Belfast Town they built a tree, and the Redcoats mustered there
I watched them come at the beat of the drum, rolled out from the barrack square
He kissed his sister and went aloft, he bade a last good-bye
"My God, he died," sure I turned and cried, "They have murdered Henry Joy!" 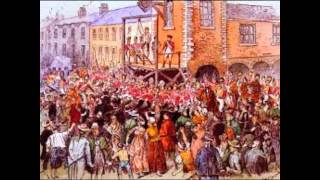 check amazon for Henry Joy mp3 download
these lyrics are submitted by kaan
browse other artists under B:B2B3B4B5B6B7B8B9B10B11