Man builds his world, forms it from rock, steel and clay
His view of nature is that it stands in the way
Visions of profit dance in every landlords head
13 in two rooms, four in every bed

Chorus:
Man-made paradise
Falls into decay
Desperate humans
Trapped in their own cage
Look out the window not a free to be seen
They just block traffic, man is forced to intervene Hiding in darkness, fearing for his life
Man's lost compassion but has replaced it with a knife

Desperate children turn to drugs for their fun
Bodies inhabit the morgue claimed by no one
Hiding in shadows, their lives reduced to a lie
Freedom forgotten, no one hears your cry 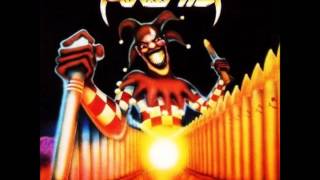