[Verse 1: A$AP Rocky]
Feelin’ like a vigilante or a missionary
Tell my A$AP killers get they pistols ready
Send ‘em to the cemetery with obituaries
Don’t be scared, nigga, is you ready?
I been thinkin’ ‘bout, all the Os in my bank account
Extra Os in my bed, ‘round the same amount
Ever since this new star fame came about
Or, even since me and Drizzy started hangin’ out
Young boy, let his gun bang, let his nuts hang
Transitioned to a Lamborghini from a Mustang
Drug slang, in the drug game, with the hustling
(I know one thing)
Anything is better than that 1 Train
Bag made at Goyard, cheffing like I’m Boyar – Dee
Probably sellin’ D and in your local courtyard
Braids like I’m O-Dog, a la familia: go hard,
Down to my in-laws, they outlaws with no law

[Verse 2: Kendrick Lamar]
We outlaw, then I bogart, any bozack, I approach that
When a toe-tag get broke off in the projects with a skateboard
I roll past and I blaze y’all like “DOOT! DOOT! ” I hate y’all
When the beef cooked, I ate y’all, like “MMM MMM” let’s play ball
In a ball park with all sharks and a blindfold I rob cold
My K hot, your nine cold, it bark like canines, throwin’
That banana clip, straight from the rip
I’ll make that shirt stay ripped, I’m on some shit
If I’m not the hottest then Hell must’ve froze over
You thought it was safe then forgot what the code was
I carry traits of a traumatized soldier
Don’t look in my face, I might snap, I might choke ya
Spine right out of place, give me dap like you supposed ta
Rocks at your posters
Drop nice like this, I metamorph like I’m supposed ta
I might slice my wrists or pretend like a vulture
And jump off this – cliff…

[Verse 3: Joey Bada$$]
Barely even conscious, talkin’ to my conscience
Gettin’ deeper and these flows like conches
I’m on my convict, don’t drop bars, I drop prisons
Don’t sell rocks! Seen the spectrum through the prisms
Somehow bypassed the bias in the
The violence and the killings, so give in
They see my pigment, and yo that was the ign’ance
Unfortunately, I am not that type of nigglet
But pass the pot let me skillet
Just got back to the block from a 6 o’clock with Jigga
And I’m thinkin’ ‘bout signing to the Roc
But my niggas on the block still assigned to the rocks
And I swear it hurt me, so I try to prevail
But when I preach it only hurt their sales
Like you’re only gon’ end up either dead or in jail
But you my nigga
Wish you the best, for real

[Verse 4: Yelawolf]
When you mention my name amongst other white rappers
Or for that matter, any f*cking rapper
f*ck it, painter, skater, musician, trailer park
Dirt ditch digging, burger flipping, eat, sleep shittin’ human being
You would be in trouble to buy double a cup of me
To these others, ‘cause comparatively speaking
My reach is beyond the bubble that they put me in
My vision’s beyond the Hubble’s, I huddle with Nubians
You beginning again – you in school at 10, late
Radioactive’s going gold
And so? Great!
Do I give a flying duck if I’m applying love to my rhyming,
Plus aligning us?
Alabama’s climbing up, wait, no I don’t give a flying duck
Nothin’ but a buckshot
“Chick – POW! ”
Motherf*ck your life, p*ssy blood clot
Ain’t never been a rapper this cold since 2Pac was froze
And thawed out for a spot date at a Coachella show
Yelawolf

[Verse 5: Danny Brown] Weed a different color like a hoodrat’s bra and panties
And my flow be overhead like pots and pans in pantries
And see guys, I’m high like Michael Jackson’s penny loafers
Moonwalkin’ on the sun, barefoot, with shades on
The bitch p*ssy smell like a penguin,
Wouldn’t hit that shit with my worst enemy’s penis
Bitch, when I say this I mean this: “Hoe, I’m the meanest”
Dick so big stretch from Earth to Venus
That molly got me nauseous, I’m shittin’ out monsters
Lawless, obnoxious, on that “suck my cock” shit
That is my synopsis, ostrich plot shit
Hoes on some got shit – “Stop it! You not this! ”
Not this, regardless, heartless and awkward
Cryin’ tears of vodka, premadonna at the concert
A goner smokin’ chronic ‘bout to vomit gin and toinc
Trust me, I’m honest, tell me: “Isn’t that ironic?”

[Verse 6: Action Bronson]
Swiftly, I shift the beamer 8-60
A heavy smoker so you know I brought the blake with me
The moon’s reflection off the lake hit me
You should have stayed with me, now many Asian bitches lay with me
The face is silky like a tablecloth
My shorty gallop in the morning on the beach like a Chilean horse
Red roses drop from boxes very often
Confetti tossing, drinking Henny like I’m Kenny Lofton
Outstanding…
I fixed the game between Georgia Southern and Grambling
You see us scrambling, selling Susan Sarandon
The cloud of smoke like the Phantom
Damn this shit taste like fantastic
You see me coming through in each state
Just so the lord can put the fork inside the cheesecake
Cuffed to my wrist I got the briefcase
Gabble slam, I’m a free man, try not to eat ham…

[Verse 6: Big K.R.I.T]
Spit like my last breath, casket wrapped, six deep
Eyes closed, the black is back, out cold, the legs went flat
After that, bottles I can’t pronounce, like “how you ask for that?”
Why you ask for crack and all you had was scratch?
All I had was rap when all they had was wack
All I wanted was love, all they had was dap
f*ck them haters and f*ck them hoes
A championship wins the aftermath
Ask Lebron, open palm slap a bitch
Walk the the plank, I’ll break a bank
I’ve been in the business of sinkin’ ships
Choking niggas out with the anchors they they anchored with
Resuscitations cost the label, I’m taxin’ if you want a hit
Clear – f*ck your career bitch, I was born here
Been a killer, eighty-sixer, nigga that’s my born year
Get the f*ck from ‘round here – that’s just my country ways
Suckin’ on your mama’s titty, bitchin’ while I was choppin’ blades
Grippin’ grain, f*ckin’ hoes, candy paint like everglades
Miss me with that rapper, child, I’ll take that shit up with my base
I put that on my soul, how could you ever doubt me?
Most rappers hopin’ the world end
So they won’t have to drop another album
B.B. King’s all the king in me so why can’t you?
In order to come up close you’ll have to dig up cash and Elvis too
The way they water flow, Dixie River Pass
f*ck your Louis flag, poppin’ Benjie tags on your wifey’s ass
That’s out of line, but in living color
I ‘m more like Miya Bailey on you rap motherf*ckers
A true artist… 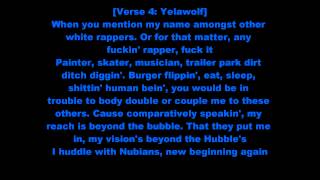