Can anyone stop the mechanical fail

[Apathy's Son:]
Look out, look out

[Apathy:]
I'm a masked man, In a fast van from the 70's
A-team bag with alota load of weapony
f*ck GPS, got Rainman memory
Dippin' thru the streets like a cabbie with telepathy
Police scanner and a hammer on the floor
Never panic like Thor, on a planet full of war
I'm made for confrontation not conversation
This is not radio playable this is ancient
Dirty, Dusty, Rusty, Grimey
Scum of the earth under the dirts where you'll find me
Loadin' up the burner start poppin' off blindly
Amazin' that a major label ever signed me
I'm so underground that I'm buried under fossils
f*ckin' European chicks in a dirty hostel,
Deeper then insects on T-Rex fossils
Sittin' in a room full of empty 40 bottles
With a f*cked up attitude, cuss like a sailor
Pimpin' little teenage hoes to Lawrence Taylor
Movies comin' soon, but I spoil it in a trailer
This is real life I'm a set you up for failure
Devastatin' force on land or sea
Bar brawler that stand taller then Tranzor Z
A complete metamorphosis
Turn you into zombies outta horror flicks
Oozin' blood outta every orifice,
Orphanage filler, blood spiller, rapper killer
Y'all grew up on Barney, I grew up on Barney Miller
Archie Bunker temper, shit he said to Edith
The shit I say to you to show your soft as Tempurpedic
Pillow top pop you then stash the glock
I catch 18 in life like Sebastian Bach
Then I'm back on the block like an astronaut
With moon rocks in my socks mad cash and knots

[Esoteric:]
The reason I'm iller, I'm a fire breathin' gorilla I'm past the point of returnin'
Destroyin' mice in a firmament, exterminatin' and burnin'
Pullin' fighter jets out the sky,
Pluckin' pilots out they helicopters hang'em out to die
You in the buildin', I'm on the buildin', wreck ya hood
My teeth go thru granite like a knife thru wet wood
Half Obadais, half Dr. Zaius, feet and chest hairs
Beat my chest cops obey us,
Glock sprayers, wanna politic like mayors, survey us
Their kids are spare ribs to me
White flags they're wavin' up bibs to me, listen
I ain't the brother, full of PhazeM jacks cover
Climatologist predict I climb Colosseums quick
Liquify brick, and find pine boxes be in crypt
I define sick, like a homicidal crime flick
You lookin' for a psycho ape I'm it, the prime pick
Put you in a Heimlich, throw you in a lime pit
I'm the shit, we know the steps,
Loadin' tecs and the co-connects
A.45 on each side like a old cassette
But you know and I know that's a bogus rep
Bounds were over stepped, ain't you focused Yet
I kill my captives they want to honor you with a heart or two
One of you, google search King Kong,
Your the wrong persuit, you prostitute, learn the ropes
I throw shit at cats,
From where I sit at that's the way I get at cats
No blit-ack gats, I'm a swing and let me get at bats
I can't chill, never rat or stand still
I'll have you sayin' uncle like Jalen Rose to Grant Hill
The man wields hands like anvils, put you in a land-fill
You get trampled over the sample

[Apathy & Son:]
Where are we?, At the basement
I'm spider-man, I'm Iron-man
So look out, Look out 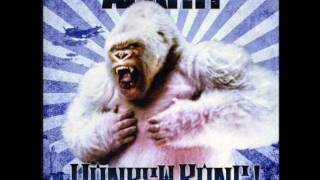