+Beautiful Teamsters
Beautiful Teamsters, please let me join.
Can't drive a truck, but I'm willing to loin.
Beautiful Teamsters, I love youse all.
That's why I'm standing by your union hall.
I would be proud to carry my load.
Help all the drivers stuck by the road.
Beautiful Teamsters, driving by night.
Pass on the left side, but not on the right.
Wouldst you would take me, life would be sweet.
Then I could eat where the truck drivers eat. Beautiful Teamsters, I'll pay the dues.
Give me the news that I'm now one of youse.
Crossing state lines with no opposition,
Thanks to the Interstate Commoice Commission.
Driving through sleet and blizzard and shower.
Blocking each street at the peak of rush hour.
Tossing big boxes into the air,
'Specially the ones that say, "Handle With Care."
Beautiful Teamsters, won't you take me,
Or I'll to back to practicing brain soigery.
Explain lyrics
Correct lyrics 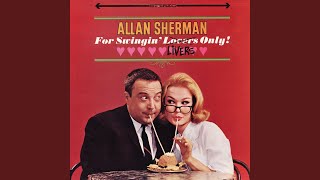