[Immortal Technique:]
I'm not down with the conscious rap, or the Sambos
My flow is cancerous milk like Monsanto's
sold through the hood, in a package of murder
I'm like white people, get fired and back with a burner
Gauge 5 semi, with the infrared beams
So f*ck the Ku Klux and the Combat-18 (f*ck y'all)
I put bullets in your spleen, sendin you to the grave
And through all that, a motherf*cker still get paid
And cause of that, some niggaz can't stand me man (hahaha)
But that's the curse of the slave like Candyman (yeah)
House niggaz that traded they soul to get ahead (jiggaboo!)
And then f*cked over for placin they faith in the feds (snitch)
So while the government, talk about a mission to Mars
They leave the hood, stuck in a position to starve
Capitalism's a religion that makes Satan a god
And teaches self-righteous people to embrace a facade

[Chorus x2: Akir + Immortal Technique]
It's a cut-throat business the way that we live
Born in the hood, tryin to see a better life for the kids
It ain't wrong to make money, legit or illegal
But it's treason, when you turn your back on your people

[Akir:]
Yo, yo, they be manipulatin, politicians delegatin
Task of perpetratin, sounds like Satan makin racist statements
of abomination, niggaz pray to somethin sacred
Waitin for that force to save 'em, instead of savin
Movin destinations, property papers, waitin on your 40 acres
'til you old and ancient, swole or achin while the hole is gapin
To cake to make your way in I pray to God but all the "Amens" in the world'll never make your aim win
Famous celebrity could fall off like lepracy, they tellin me
So I pay attention, f*ck the envy and the jealousy
Y'all niggaz could save, Akir's a latest rave
Saw me chillin on The Source page, fanbases span race
Complete with shorties that blaze, be revered in my old age
from rippin the stage, and even then from above when I wave
Throwin flowers on my grave, burnin sage
Sayin, "Thanks A, who made ways for freein the slaves," uhh

[Immortal Technique:]
Immortal Technique, Indian chief, Lord Sovereign
Bear claw necklace and the puma moccasins
Legal money motherf*cker, you could bring the coppers in
Cause I'ma take a shit on 'em, without Johnny Coch-a-ran
Spittin Prometheus fire, when I speak to a liar
I'm the last of the Essenes that'll teach a messiah
Rip your heart out, with the technique of a Maya
Cause only snitches and Kanye speak +Through a Wire+

[Akir:]
Freshest attire, speak with desire, close to the passion
I fall from Elijah, size up the evilest liars who think they conspire
Music qualify as paranoia, mental occupiers
Tight, like a pair of pliers, brain's fried up
And so I aspire to erase the pride, usin amplifiers
to inspire my people, we should hire
Like a lion fightin vampires tired on his way to Zion
Never expire, only retire when they call me Sire

[I.T.:] It's a cut-throat business the way that we live
[Akir:] Born in the hood, tryin to see a better life for the kids
[I.T.:] It ain't wrong to make money, legit or illegal
[Akir:] But it's treason, when you turn your back on your people, yo 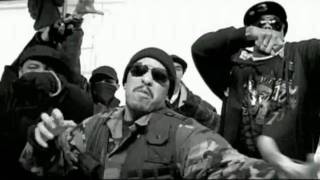