Get Em Up Lyrics

Get Em Up Lyrics

[Verse 1:]
I got my drop top rollin' and I'm headin to the mother land
Rippin' on that steering wheel, passenger's a duffel bag
Hundred in the louie, don't confuse me with that other cat
Engine in the truck jack, pushin like a super pack
Automatic button pad just to keep the top back
Ruby red insides, lamborghini fruit snacks
Twenty-two, that's what I shoot, you know them bitches got a mack
Back to the back of the lac incase them p*ssy niggas wanna jet
Know I keep that .45, turn you into Cabbage Patch
Hit you right between the eyes then leave you like an alley rat
100 for the bracelet, a track, I'm like a magnet
Hit 'em with that gutta swag, swangin with the louie rag

[Chorus:]
Say I maybe gave a damn but I never gave a f*ck
Rep your city like a G then put your middle fingers up
I got that east side rollin', and that west side smoke
South side rollin with me and the north side gon
Get Em Up (Ay, Get Em Up) [x7]
You rep your city nigga, gon' show it up

[Verse 2:]
And it go, eenie meenie mini mo, catch me slippin' never though
Know I keep that full clip, come and get cha super soak
Call me Mr. Cinemax, shoot you like a movie role Hundred on the highway, let's see how fast the coupe can go
New Edition fit the kid, they ship the shit from england
That's me in the foreign whip, climbing like the ring-a-lings
Yes, I'm on some other shit, don't know who you f*ckin with
Yes, I keep that .45, you better keep a body guard
Benz is in the parking lot so you know the block is hot
Tell em we don't give a shit and mother f*ck the other side
Bitch you know I'm born to ride, H B and some murda minds
Open up the suicide doors, call it homicide

[Verse 3:]
I got my black flag swangin and I'm bangin on some gutta shit
Just copped me a spaceship, took it from the government
White-on-white drop top, call that bitch a cool whip
Had to blow the brains out, yeah I keep it ruthless
Know you niggas mad but tell em haters I does it
Better quit that fussin, don't know what's in the bullpit
.45's a motherf*cker, hit chu and your cousin
Think I gave a damn but I never gave a f*ck
Got that oven heated up and bitch you lookin like lunch
Take them heaters to your gut like it's a million uppercuts
Then I dip off in the cut and throw it up, who give a f*ck?
Got that vodka in my cup, bring my gangsta to the front, what's up? 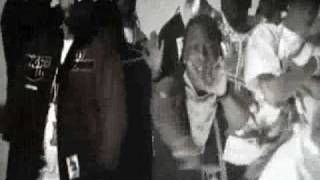