[Verse]
Streets don't love you, they killed Quado
Streets don't love you, they killed Beasty
Let my niggas come home tomorrow
Don't just let them see me on TV
Let my niggas up out that you know
You don't even know how I be thinkin', that shit crazy
Not my broski, no, not my bros, yeah
Let my niggas come home tomorrow
Free V12, yo
I remember when we was like twelve, we went through hell, yo
Back when niggas was gettin' they Biggies and they Pelles took
Bitches used to curve me, used to swerve me, nigga, now look
They ain't never want me, now they askin' to get they nails done
I know I smell like dope, they gassin' me, tellin' me I smell good
Passin' me the p*ssy, I passed it to my homie real quick
Audacity to ask me 'bout the bitches that I still f*ck
The audacity to ask me 'bout the bitches that I still f*ck
Your ass is lookin' fat, them Fashion Nova jeans look real good
I'm glad that I came up 'cause I ain't know where I would end up
The thirty clip is on me but the hoodie cover my extendo
And niggas act so tough
But I just swear they don't wanna start, though
Let me tell you 'bout this young nigga from the Bronx, though Everybody want his head, but nobody had his heart, though
Robbin' everybody like he don't believe in karma
Somebody told the feds what he did, they lined him
Told 'em where that nigga lived, yeah, they really lined him
He still sleepin' at his crib like f*ck it if they find him
Price is on his head 'cause he hit a oppa
Money on his head got him movin' wiser
Hoodie on his head, they wanna pin his poncho
Pulled up to the crib, he livin' wit' his moms though
But they don't even care, they like, "Hit 'em all up"
His eyes turned red and his fists balled up
Voices in his head sayin', "Kill them all," but
Bullets hittin' glass, goin' through the walls, oh
All he heard was screamin', he feel like his time's up
He ain't have no time to go reach for a glove
He just grabbed the pump, start squeezin' at the door
But then he seen his moms laid out on the floor
He dropped down to his knees, head high to the Lord
Ain't the type to cry, but his mom, he really loved
Tears from his eyes dropped beside of the blood
He wishin' it won't hurt, but he cried 'cause it does
Then he put his own pump right to his mouth 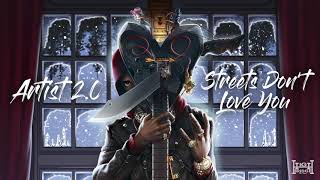