We faced off, the desert behind us,
the only chance for water ahead of us,
and them, faceless bush warriors.

I looked at her, she looked at me.
Sixteen of them, two of us.
We'd either quench our thirst or die trying.
I raised my graphite blade and whispered "I love you."

We battled with skill and determination, but cha just
don't beat the odds.
I came too, strapped to a dead tree,
left to rot in the hot sun.
She was no where to be found,
creeps had taken her.

Too weak to struggle, I tried to make the best of my
few remaining hours.
I awoke to the feel of a firm hand washing my wounds
with water.
It was a tall muscular dude,
bald as a jay bird,
with a gold band around his waist.
I recognized him as the one they called The Master.

I thanked him for saving my life,
but I wanted to get on in hopes of finding her.
The Master said, "bush warriors don't take survivors."
But he knew how to find em, revenge was sweet.

The Master located them in a ravine.
We made short work of all but one.
I needed to know what they done with her.
He simply laughed delighting in the pain he saw in my
eyes.
Revenge didn't fill that emptiness. The Master gave me a lift in his 2 man galaxy hopper.
We headed a light year a way to Sagittarius.
Sagittarius, a small time paradise.
Some cheap little bungalows and a mind warp machine.
I needed a break.
A stone bed and mind warp seven can do a lot for a
suffering man.
She still haunted my every thoughts.

Some nights, I woke in cold sweats,
it was like she had been standing over my bed.
But as the months passed, my mind began to grow numb.
I think it began to sink in, she would always only be a
memory.

The years flashed by,
2 full scale wars had raged the mountain regions.
I engaged in many a battle, the more the battles,
the more peace my mind would find.

On the last hour of a full moon day,
I found myself on high windy peak.
A messenger had slipped me a hand written note,

I was to meet the past.

What I saw nearly grought me to my knees.

There she stood,
in the suit of armor she had worn that last day so many
years ago.
But as she drew near,
tearful reality set in.

"I am not she" her voice echoed
"I am her daughter",

"you are my father." 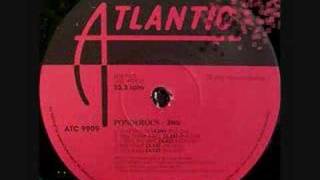 check amazon for She mp3 download
these lyrics are submitted by kaan
browse other artists under 0-9:#2
Record Label(s): 2007 NU MUSIC
Official lyrics by