[PART I: The Mundane World]

Never once did we stop to think
What if this all came to an end?
If everything we knew was gone
If reality became pretend

But you carry on as if nothing will change
Nothing is out of place, nothing new or strange
Familiarity has become part of you
It rules your judgement on what is false or true

Did you ever wonder why it is this way?
Did you ever ask if other worlds exist?
Could it be that we're the only ones
Or are there others hiding in the mist

What if there was a world that we did not know of
Where creatures lurk below and dragons soar above
And what if that world began to enter ours
Would it enter quietly or with devastating power?

[PART II: Tear in the fabric of Reality]

It started subtly, unseen by all
Thought as insanity, the common man would just ignore
In shadows they did hide until the time
When they'd break free and ride, but now they just wait for the sign

So few have seen the change and how they try
To warn everyone before they die
But they are not believed, they're thought insane
They're hunted down like dogs, captured and then locked away

The darkness soon spread far, the time was near
The demons would soon rise and fill the world with pain and fear
The death toll then increased each passing day
The evil hunt began, the humans had become the prey

Then it was too late, the time had come
An evil killing spree already begun
There mission to destroy the human race
Technology was lost man would fight with sword and mace [PART III: The Coming of Evil]

Demons are among us the evil ones have come
Spreading their destruction, killing everyone
How can we fight that which we do not know
Mankind has lost everything a new dark age is hear
Evil spreading sorrow, agony and fear
Despair is rising, all hopes are low

Governments have fallen, nations are no more
No one left to fight this most unholy war
Why is this happening, no one can tell
Dragons flying overhead, breath of fire burns
Goblin armies marching in, death at every turn
No one to save us from this nightmarish hell

Their numbers grow each day, ten thousand strong
How can we hope to win, it won't be long
Before we are destroyed, become extinct
They eat our flesh and bone and our life-blood they do drink

Suddenly a hope came to us
From the Immortal Realms
Elves with mighty swords and armor
Rugged Dwarves as well
Magic wielding fairies casting
Fireballs bright as the sun
Satyrs, Fauns and Centaurs joined them
Battle has begun

Evil: Death is coming
Good: It's you who'll die
Evil: Immortal power
Good: Our swords held high
Evil: The dead will rise
Good: We will prevail
Evil: You can't defeat us
Good: Send you to hell

And so the two armies fought, neither able to claim victory over the other
Instead a balance was reached
Half the world basked in light, while the half suffered in darkness

To tip the scales their way, both sides did try
But balance did prevail though many died
A new dawn has arrived and now they see
A new dark age is here, Twilight on Humanity!
Explain lyrics
Correct lyrics 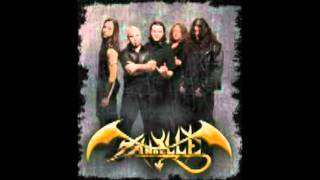