Yeah, losing weight
I told you I'm f*cking loaded mate
Grinna died one time I cried like a bitch
Trizzy died the next time I saved all my tears
'Cause Grinna they didn't come back, the first time I did
Type of way to drive a man mad, then make him quit
I remember when my pops said I make him sick
Then I told my mom I loved her and she didn't say shit back

Yeah, well I can't blame 'em, say what I want then finish we were aiming
See us as targets then I start aiming Whilst all niggas out here and they still aiming
M&S in jail, Ginge in jail
Geo in jail, 8 as well
Ape killed ape, I got sick tales
I've been there too so I can tell
Youth, it ain't a place to be
I'm sick of visiting murder scenes
From young, my since been a murder team
Sometimes I think that it's karma pulling tricks out her sleeve
Yeah, hmm, only sometimes

It's been a minute since you called, I'm tryna hear "I'm proud of you"
You're tryna test me if I change, I bet you think I'm not the same
So then I go answer call and now you're thinking that I change
Without realizing that you was waiting for that anyways, anyways
Bet you think it's a game
Bet you think I'm rapping for rap sex
Bet you think I'm a stereo type
Well f*ck the comments they typing below it's never to my face
God said I'ma die great
Every move I make is by His grace
Fell in love with money but it's two faced
So I'ma blow too much before it's too late
I bet we'll never make it too late
I bet we'll never make it too late
That goes both ways
Always 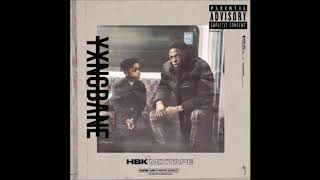