Fire Down Below Lyrics

Fire Down Below Lyrics


When I was young, yes just a lad, me father told me son, Ye have te promise never ever a sailor to become. Upon our family befallen, has an awful curse, And if ye try te fight yer fate, yea'll only make't worse.

And soon there after all the men cried - Fire down below! Ye brought a wench and now we're doomed, the ship is gonna blow!

Yer Grandpa died right there at sea, but the curse passed on to me, As a sailor I set out to be, I lost me limbs at sea. A stray shot of a Spaniard ship hit a powder keg, A fiery blast like nothing else gave me two wooden legs.

I lay there legless under deck with Fire down below! Then I rolled overboard before the ship was gonna blow.

I've always known me father be a lier and a drunk, And that same night as Pa' passed out, I packed his sailor's trunk. I enlisted on a man o' war to prove me old man wrong, I would show that unlike him, I at the sea belonged.
But suddenly I heard the swab cry Fire down below! And I prayed to God, don't let them say - The ship is gonna blow!

I lay there sobbing like a lass, begind the main top mast, as others manned the pumps and put the fire out real fast. I cursed me selff I felt ashamed, then got back to me feet I swore to never more disgrace the British royal feet.

But one day later, I smelled smoke and Fire down below! And all the men cried, save yer selves, the ship is gonna blow!

I remember smoke and burning flames, followed by a boom, Then I woke up on a beach to see, me arms were lost n' doomed Now I know fer sure me son, the curse fer real it be I moved off coast so you will never, look upon the sea.

But in me sleep I still hear screams = There's fire down below! I jump the bed, scream is I wake - The ship is gonna blow! 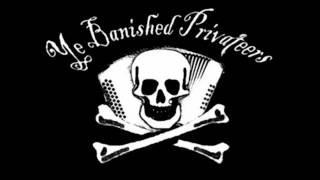 check amazon for Fire Down Below mp3 download
these lyrics are submitted by kaan
browse other artists under Y:Y2
Record Label(s): 2012 Ye Banished Privateers
Official lyrics by