Rubbin Off The Paint Lyrics

Rubbin Off The Paint Lyrics

They say Lil Nahmir where you been at? I'm just passin' a breeze
I been runnin' up a check, that's why these bitches on me
I been coolin', layin' low, but I'm not takin' a seat
But just know a nigga back and this time I won't leave
I been runnin', runnin', runnin', gotta check me a bag
I got hunnids on my neck and I got Trues on my ass
Niggas said I'm goin broke, well I just take it and laugh
I be speedin in that foreign with Five-O on my ass
But I'm that nigga, I won't ever change
Rubbin' off the paint, smokin' dank
Got a Uzi in my lap, I let it bang
Free Lil Tay, know he keep a 'K, but he not Tay-K
I up the chop and let it blow him, watch this bitch heat his face
I'm that nigga
And all my young niggas pullin' triggas, we gorillas
We let this bitch off until you feel us
For you niggas, that's always on IG with them yiggies takin' pictures
Is you really gon' use 'em or you just loafin' for them bitches?
You niggas really hoes and you be acting like these bitches
You niggas say y'all silent but y'all probably in there snitchin
Most the niggas that's around me throwin C's like they crippin' But they do it for the twins, free Lil Corey and Lil Christian
But I'm rockin with my shooters and that's mandatory
One up top like I'm Mozzy, bitch I keep a 40
You say I'm lackin', nigga try me, shoot you and yo' shorty
I'm cookin up in the lab like I'm Rick and Morty
40 poppa, hit a mobsta, turn your brain to pasta
Hit a opp up, dreads swangin' just like I'm a Rasta
Smokin' ganja and I'm zooted, walkin' in my Pradas
Any nigga test my gangsta nigga, I'ma pop 'em
And we ain't throwin hands with you f*ck niggas
It's one up top up in that chamber, better duck nigga
Niggas dissin on Lil Valley, he get slumped nigga
We shoot his body then we lay him in that trunk nigga
I'm one-hundo, bitch that's on my life, I will never fold
A nigga speakin on Lil Quay, well then that nigga gotta go
I'm really small but I can fight but I'ma still up that pole
For you niggas think I'm p*ssy, you gon' have to show me hoe
Police always at my f*ckin' crib, I don't tell 'em shit
I'm really rappin bout this f*ckin life, that I f*ckin live
But I be coolin', tryna focus on them f*ckin' dividends
But if it's money on yo' head, well I'ma f*ckin get it, man 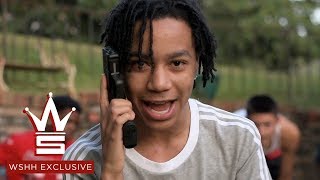