[Verse 1: XV]
Damn, why you gotta be so bad?
Yeah, I know just what she gon' ask:
"Vizzy, how many ways can we go? "
Up, up, down, down, left, right, cheat code
Never know where I landed
If it was Neptune, I didn't plan it
Man, I guess it's ambidextrous
Cause I dealt with what I got handed
I didn't care cause I wanted it all
Never sold base but I wanted to ball
And I just wanted it (Faster, faster...)
So I chased it (Faster, faster...)
I brought a little trap in all of these nerds
Put a little black in all of these 'burbs
Green backpacks on all of these backs
Cause all of my raps is kind of absurd, word?
Tell me they isn't; bars, no prison
Coming off the lot with a car, no wimping
Pin-up models is all I'm pinning
L7 niggas, aren't we winning?
Prove that I aren't, and I'll move to the part
Of the city where niggas who lose go
I don't lose, though
Catch a dub like Nick, get an A on the track, I'm fool's gold Got new clothes to be dressed in
New girls in my section
Ask where I'm going, I never am knowing
I'm going in all directions, like...

[Verse 2: Emilio Rojas]
Wait-wait-wait, hold the share
How the coldest spare get a hold of the only golden ticket
In the middle of a city where they hold and stick you
And the hoes only pose and they going for pictures
Flash, flash, with the kodak
Yeah, clap clap from the po' gat
Now, if you don't duck then it go black
Everybody 'round hear the sound, they get low fast
And the scene wilder than Gene Wilder
Like Johnny Depp, they gon' ruin it
And them females, they ain't even fly
But they want it all, like that Veruca bitch
And I'm moving in for the kill
My ex is loving me still
I don't f*ck with it, cause there's other fish
That don't swim with blood in they gills
And I got women that are stronger than it feels
They pop birth control and they vitamins
And then Plan B like they vicodins
And them mollies just cause they like the shit
Huh, and see the candy man
For the percocet and that ativan
They at rock bottom, dropping top dollar
For the gobstoppers that'll have to last
And I have to laugh
When I'm looking at a motherf*cker that I know I used to go to school with
And they acting like we best friends and I never been cool and I never even knew him
They mad, they picking out ties
That'll never even have to tie my own loops in
And I'm 'bout to hit the top floor, looking down
On y'all, that's what my view is

[Outro:]
[Sounds of TV static]
[Peter Gibbons:] What would you do if you had a million dollars?
[Lawrence:] I'll tell you what I'd do, man: two chicks at the same time, man

[Sounds of TV static]
[Michelle Tanner:] You got it, dude 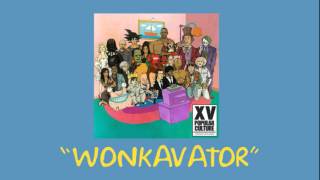