Sweet and low,
Wondering how deep he goes
So she's being bold and plunging 20, 000 leagues below
The breed of fishes that she frequently swims with
Cause she's seeking difference and
This bottom feeder just might peak her interests
He drinks it black
While her half and half provides a fog
To the diner coffee and the complicated dialogue
Conversation cascades
Adding to the ashtray
Overlapped, he's getting last place in this rat race
Shes got the benefits
He's got the penmanship
But she's not impressed with
All his cliches and references
But he seems competitive
At least for a pessimist
So maybe she's a victim of the unexpected twist?
Nah, this can't be serious, she'd never date a lyricist
They get another round, just to keep themselves delirious
3:30 am, they're on the seventh cup
And he's nice, but he's not the type that she could ever love, right?

Swallowed by an art deco cushioned booth seat
They'll discuss novels that they've never read and dress like extras in a movie
The kind they don't make anymore
He always dug the diners where it's quiet aside from the plates and the forks
And she, she admires any dive that lacks familiar faces
Shallow conversation or the ignorance they fill her days with
He's certain that's he's got her purpose exposed
"Who you kidding, little liberal in conservative clothes"? Before the stars short circuit and the moon is in a free fall
It joins the sun in the center of the see saw
And in the moments just before they descend
You can look up in the sky and it all makes sense
But he's a designated Dear John Letter in the making
And she's a wall street road block on the pavement
It's 8:30 am, they're on the ninth cup
As they waltz with the words that tries to define love

She's an over-achiever where he's afraid to attempt
He's got the soul of a dreamer where she's created a fence
And she's painted it white picket, so the neighbors wouldn't notice
That she's hopelessly devoted to her motives as a poet
But, now they're finished skipping stones across the surface
He's got her body language written out in cursive
Over-analytical, the typical wordsmith
Maybe it's a mismatch, maybe this is perfect
Tonight the pen is gonna play the part of therapist
He'll flesh the story out in third person narrative
He's not embarrassed but it's difficult to tell
Since he never really wrote a love song about himself
They had the caffeine and clever conversation
Till the patrons said good morning when they ordered eggs and bacon
Now There's a hesitation waiting at the bottom of the mug
Like, what you doing later? would you wanna fall in love? 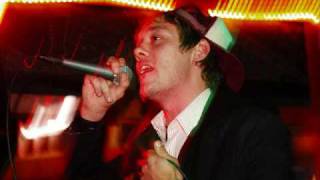