It's Too Late Lyrics

It's Too Late Lyrics

(Spoken):
I just guess that you're wonderin' why I always sing a
sad song
But you see, I had a woman who was very good to me
& I can remember the times she used to sit down & tell
me these words:
Said, 'Pickett, I want you to know I love you from the
bottom of my heart
& whatever you need, I don't want you to go to your
mother, your father, your sister or your brother
I'll be a leadin' pull when you're fallin' down When all your money's gone, I want you to know you can
count on me'
But I didn't appreciate that woman then
You know what? I had to run & chase after every little
girl around town
So finally one day I got home & I found my little girl
gone
& people, you know it hurt me so bad (ha ha) I had to
hang my little head & cry
Then I began to read the letter she left for me layin'
there; it read like this, children 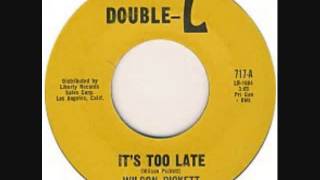