[Chorus]
Woooo, do you wanna pimp wit this guy
Do a buck on a ninety-five
Run with them hookers when they payin sheen
Talk of sex-appeal, I was born gangsta...
Shittt, don't play wit me, and in the game I'm as real as they come
Threw the knife, baby, out of the sun
Even a susperstar, Cuz I'm a gangsta...

[W.C.]
Now let's get one thing straight
You f*ckin with a nigga thats liable to catch a case
I'll turn ya birthday into your worst day
Bitch I'll have you on a high-speed chase on the first day
Umm, try 'n throw, I'm so, affiliated
This greenery got me sedated, I'm feelin faded
Hood life, the life of a robber on chrome wires n switches
A nigga wit mo' crimes to riches
A ghetto jumpstart, Post it up with the tiny homies in my momma's front yard
A hood pioneer, can't function without the smell of gunpowder
And fish fryin' in the air
I'm a sheist nigga, Check for ice nigga
Bitch, You got the wrong nigga if you want a nice nigga
I'm Dub C, f*ck a MC, catch me in a MC on a buck twenty, Bitch f*ck wit me...

[Ice Cube]
Some bitches don't believe I can spit that 'Izm
Till they wind up wit dick all in 'em.
Till they find theyself pullin' off denim
Intoxicated, off this venom
I kick game, big game, Nickname
Insane, Ice Cube spit flame
Yall niggaz gone feel it down-range
Body feel strange (Blah!!) No brain I'm a throwback, that know how a gangsta do it and a hoe' act
Get off tha dick if you don't wanna blow dat
Cuz bitches trip the Bulls, act like Prozac.
Now there's Gangsta-ism, and tribalism
I'm only f*ckin, wit survivalism
Fo-fo to the do' is my religion, Now wha's yours
Pray, before I bust yours...

[Mack 10]
Every time I come around bitches starin at me
Point nigga Mack 10 from the Dub S-C
Wit a L.A. fitted hat and a fresh white tee
Fulla flair and pizzazz but I'm a straight up G
Cocky cuz I'm rich, look good and I know it
But I'm confused on what to be, a deep boy or poet
Head is mandatory, bitch, there's so much to blow it
If I do fall for you I refuse to show it
So if you think I ain't pimpin, Man that shit is absurd
I stay hard on 'em, fulla 'izm, f*ck what chu heard
You say you down for me, shit but thats only words
Wanna show me love bitch, I wanna play wit a bird
So regardless of the weather, bitch don't get the chedda'
And keep big daddy ridin' two-three's or betta
Wood on the dash wit the peanut-butta' leather
And like that Al Qaeda love we can blow up togetha', Holla... 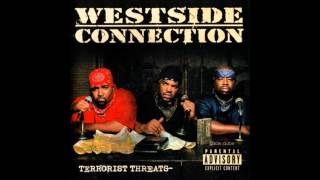