I scandalized my brother while admitting that he sang some pretty songs
I heard that he'd been scandilizing me and Lord i knew that that was wrong
Now i'm looking at over something cool and feeling fool enough to see
What i had called my brother,now he had every right to call on me

Chorus (W. Jennings,W. Nelson):
Don't ever cuss that fiddle,boy unless you want that fiddle out of tune
That picker there in trouble,boy ain't nothing but another side of you
If we ever get to Heaven,boy it ain't because we ain't done nothing wrong
We're in this thing together so let settle down and steal each other's songs

(W. Jennings): I found a wounded brother drinking bitterly away the afternoon
And soon enough he turned on me like he'd done every face in that saloon
Well we cussed him to the ground and said he couldn't even steal a decent song
But as soon as it was spoken we were sad enough to wish that we were wrong
I know that it sounds silly but i think that i just somebody's song 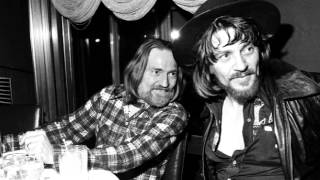 check amazon for Don't Cuss The Fiddle mp3 download
these lyrics are submitted by kaan
browse other artists under W:W2W3