Usurpers Of Our Legacy Lyrics

Usurpers Of Our Legacy Lyrics


With two tongues of silver, honeyed, sweetened with
gold,
Claim now, compensation, for the lies we’ve been sold,
The mystery disperses, the myth falls away,
Thus, ending the dark days, when the clergy held sway.

Hearts and minds of the people
Ensnared long ago.
Strangers to the energies
Which no longer flow.
With tales of the trinity
Convincingly told
Demeaning our ways
As heathen and bold

The courts of the kings, a pulpit and a stage,
Manipulation of a fractious land.
Politicise, cast words of doubt,
Fan the flames of discontent.

Rise up Pagan sons and daughters,
Symbolic swords held to the sky,
(With the) Sun God in ascendancy,
(We) illuminate hypocrisy… AAAAAriiiiise!!! 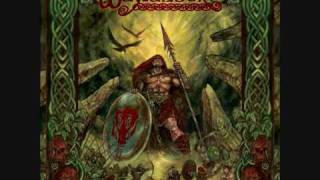