Oh, the moon was full
And the color of blood
The night the pirates came
To the Vampire Club
Their leader was tall and snide and slim
He looked like a gay Captain Morgan
Well, he recognized a Vampire
From his school
And he did something that was
Most uncool, he said,
"Hey everybody, see that fool in the cape?"
His name's Bernie Weinstein
And he's in the 8th grade!"

Fangs were flying, capes were torn
Hell hath no fury like a Vampire scorned
The number one rule in this game:
Never call one by his real name
Wigs were pulled, top hats were crushed
By pointy boots in a rush
And Boris at the bar orders a Bud and says,
"It's just another night at the Vampire Club." Missi lost a fang in the ladies room
And we all laughed and called her 'Snaggletooth!"
And Dee was mad cause he broke his cane
And he flushed his contacts down the drain
There was so much angst after the fight
Vlad and Akasha broke up that night
While some rivet-heads danced in a puddle of goo
That used to be "Father" you-know-who!

Well, its hard to believe but we're still around
And when we hang out it's upside down
Dressed in black from toe to head singing,
"Bela Lugosi's still undead!"
A gaggle of goths is a peaceful site
We'd do anything to avoid a fight
But if you really want to see some gore and blood
Wait 'til the Ravers come to the Vampire Club
Explain lyrics
Correct lyrics 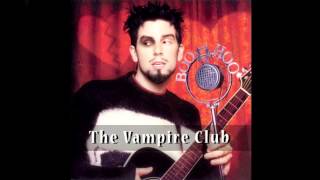