The Friends Of Mr. Cairo Lyrics

The Friends Of Mr. Cairo Lyrics

Frankie: The cops are outside. Luke's in the car. Come
on, let's get the hell outta this joint.
Woman: Frankie, when they get here wer're gonna be
dead, I know we are! We don't have agun!
Frankie: Listen. We got three million... Listen,
[spud]. We got three million in the can, here. We can't
look after him, I'll send the bird to his mother. Come
on, let's just get out of this place, we can do it!
Woman: Oh, no, Johnny, no...

Frankie: Okay now, just lean up against that door. When
I give the word "Go" we just..., we just go through it
and blast at the same time.

She came, as in the book, Mickey Spillane
That Saturday night dark masquerade
Had filled his friend with lead, the same, sweetheart

But then, as nothing happens quite the same
Investigation is the game
He had to check her story right away-he dead
Sam Spade his buddy Archer first to go he got it
She spelt it out, how could they know the 'Fatman' got
it -he dead
Her sister didn't really live at all-confusion-he dead
His chase led to the Fatman, to face the friends of Mr.
Cairo

[movie like speech:]
Woman: Hey, there's a really terrific dress shop. Can
we stop this raid while I buy a new gown?
Frankie: I'll buy you the whole factory, sweetheart.
Don't worry.

That night, the double crosser got it right
Pretending he was really dim
He slipped to Sam a double gin (Mickey Finn)

He woke, the boys had gone, but not his gun
They'd left a note to lead him on
The chase to find the Maltese Falcon-you bet-

From Chicago to Hong Kong
Via Istanbul the Talking Tong

Acting out this fantasy
In Hollywoods vicinity

[movie like speech:]
Kasper: ha, ha, well done Mr. Cairo, and what do you
have to say about that, my friend?
Spade: Allright. So you've got me in it. What about
her?
Brigid: Don't worry about me, I'm okay
Kasper: Very magnanimous, sir, very magnanimous indeed, ha, ha, ha
Mr. Cairo: You mean..., you won't make us an offer
we... we can't refuse...

Father love do you work, do you work for Mother
Chances could call, and accept that, be no other
Science as it might, disappear correspond with colour
Chance is the fruit, will outlive, what is now the
brother
Call for total wealth to distribute like a picture
In black and white, give it joy, give it, let it hit
you

[movie like speeches:]
Man: I don't know which words to put in there
sweetheart, you know, I can't do it. Pretty kind of
useless, though, don't you think so Mary?

Man: Come with me to the far lands of Baghdad.
Woman: Oh, if only I could. That's what I want more
than anything in the world, but it could never be...
Man: Of course it can...
Woman: But my father would find us wherever we went.
Yes, he has forbidden me to... to even speak to you, if
he finds me now. I don't know what he'd do...
Man: But he doesn't know that I'm... I'm a prince.
Before, I was the thief of Baghdad now...
Woman: It doesn't matter...
Man: Then follow me, darling, follow me now to the ends
of the Earth

One on one to talk to you
Like film stars they get close to you
You've mirrored his appeal
He wants you so, he wants to be beside you
Then you pass by giving him the other side of you
Like the mystics do
So that every time he moves, he moves for you

Soul and light can always see
The meeting of true love and she
This silent night and I,
I guess a lonely mind might see

I've seen love on the screen
I've seen a screen goddesss and me-oh
How often this, how often, this the power of you
And so, I must confess
Whatever I see
I'm meant to be there with you
With you with you

Silent golden movies, talkies, technicolour, long ago
My younger ways stand clearer, clearer than my
footprints
Stardom greats I've followed closely Closer than the
nearest heartbeat
Longer that expected-ther were great-
Oh love oh love just to see them
Acting on the silver screen, oh my
Clark Gable, Fairbanks, Maureen O'Sullivan
Fantasy would fill my life and I
Love fantasy so much
Did you see in the morning light
I really talked, yes I did, to Gods early dawning light
And I was privileged to be as I am to this day
To be with you. To be with you

[movie actor like speech:]
Mr. Cairo: Listen. I have arranged this display for...
for all of you people to... to come here this evening
and I... I know you have been searched, but, what
you... you don't realize is, is that in the back of the
Maltese Falcon, I have it ... 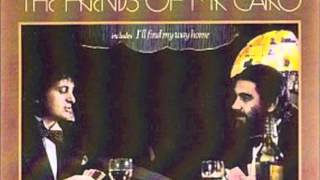 check amazon for The Friends Of Mr. Cairo mp3 download
these lyrics are submitted by kaan