The city's spread beneath my feet,
But not the one that I was after
While I've been pounding out this beat
The length of the Kudamm.
Street legends on the tourist map,
A fading script in Gothic,
Out in the studio they're
Rehearsing in drag for a lark.
Come on, let's get lost in the dark.

Tale another step, another move, another pace,
What isn't written in the manuscript is a note to play
with grace
And if I exit from this story in a way I might retrace
It will have fallen through the cracks when I come back
In any case
Another time's another place.

The city's spread beneath my feet
From the top of the Mercedes tower
And I can see the darkness closing in
Hour by hour.

But I can't take another step, no filling in, no cut
and paste, A bankrupt process for the memory, this terrain is laid
to waste.

No, nothing's written in the history books
That doesn't leave a nasty taste;
So should I start to tell the story
Will you put me in my place?
'Cause it'll all be crash and burn
When I return...in any case
Another time's another place.

Just when did this get broken?
I don't know where to begin -
I got a Ubahn ticket and a Flohmarkt token....
I'm in trouble in the rubble of Berlin

The light is getting dimmer,
The walls of history close in.
In Babelsberg they're hunting
For a different Stimmung
That predates the war. 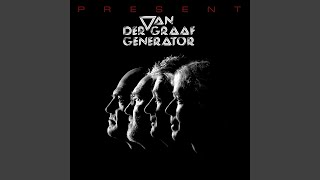 check amazon for In Babelsberg mp3 download
these lyrics are submitted by kaan
browse other artists under V:V2V3
Songwriter(s): peter hammill
Record Label(s): 2005 The copyright in this sound recording is owned by Virgin Records Ltd
Official lyrics by